Nissan Juke-R to go on sale 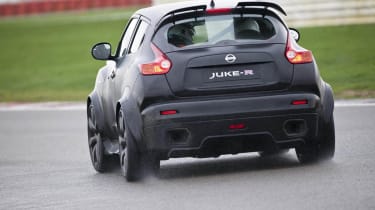 Nissan has confirmed that it intends to put its barking mad Juke-R, the crossover hatchback crossed with a GT-R drivetrain, into 'very limited' production.

The Juke-R, which was engineered and built in Britain, was originally intended as nothing more than an attention-grabbing concept, but a Nissan spokesman told us that the company was responding to 'overwhelming pressure' to create a road-going version - apparently three people have already put deposits on one!

The production Juke-R will stick closely to the script of the two original concepts, with the running gear of a GT-R put into a heavily modified version of the standard Juke's bodyshell. There's no news on price, although we're told that it will be 'very high' - the cost of donor cars, so around £100,000, then four months bespoke build cost - but the good news is that the road-going version will get a more powerful engine than the concept, with the updated 540bhp version of the GT-R's mighty twin-turbocharged V6 powerplant.

Like the Juke-R concept, the production version will be built in Britain, and we're told that the ultra-limited production will likely be no more than around 20 cars. We'll bring you more details as and when we get them, but in the meantime watch this video of the original Juke-R concept being put through its paces below.