Nissan's first production Juke-R has been completed, and more details on the Juke Nismo have emerged. 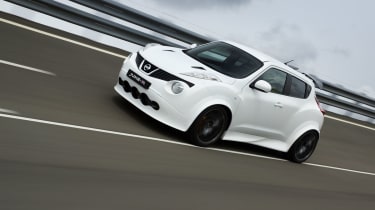 Nissan’s Juke-R concept was such a success that the company surprised the world by announcing it would be producing a limited production run of Juke Rs, with prices starting from £400,000. The first model, Juke-R 001, has just rolled off the production line.

Like the original concept, production has been farmed out to motorsports specialists RML, who start with a basic Juke, transplanting the GT-R’s twin-turbo V6 engine, drivetrain and suspension into the Juke, which requires substantial re-engineering. The dashboard of the GT-R is also made to fit, as well as a full roll cage and race seats.

Nissan has confirmed that the production Juke-R will have more power than the concept, now churning out a 2012 GT-R matching 545bhp. This means a claimed 0-62mph time of 3.0secs and top speed of 170mph.

The white Juke-R in the photos showcases the updated styling too. The bumpers and side skirts were redesigned by Nissan Design Europe, the UK-based design arm of Nissan responsible for the successful Qashqai and Juke. New carbon trim on the front and rear cooling vents and the diffuser complete the changes.

As well as the extremities of the Juke-R, Nissan has revealed more detail on the Juke Nismo, which is set to go on sale early next year. It will be powered by a 200bhp version of the 1.6-litre turbocharged petrol engine – in a similar state of tune to the recently unveiled Renaultsport Clio, which will use the same powerplant.