Breed a Nissan Juke and Nissan GT-R and this is what you get: the crazy, pumped-up and road legal Juke-R 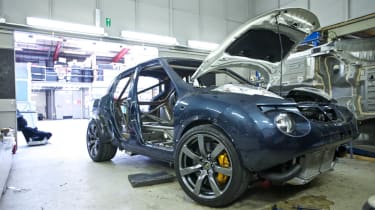 What happens when you cross a Nissan Juke with a GT-R? This isn’t the beginning of a car-themed joke, it’s a question asked by Nissan which its motorsport pals at Northants-based RML have answered.  The Juke-R is, in Nissan’s words, the ‘fastest, most exciting and daring compact crossover in the world’. With the regular Juke’s marketplace so tame, such a boast shouldn’t be too hard to achieve. But with 480bhp and all of the GT-R’s electronic trickery on board, this pumped up version should hang onto such bragging rights for quite some time. While development isn’t quite complete, two road-going versions of the Juke-R (one left, one right-hand drive) should be finished in November. Unsurprisingly, a production run isn’t planned and your local Nissan dealer won’t be very receptive to order requests. But an overwhelming public reaction could encourage Nissan to pump the Juke up beyond its current 187bhp maximum. For now, the Juke-R will be a PR machine, showing up at race meetings and key motoring events, with sprints up Goodwood Hill next July one date likely to be in its bustling diary. In short, it’s the drivetrain of a Nissan GT-R – the 480bhp twin-turbo V6 from the 2010-model car, plus its four-wheel drive and six-speed transaxle – shoehorned into the body of a Juke. It’s been a tough ask, too, with the mini-SUV’s body requiring much fettling to make its new mechanicals fit. Its wider track front and rear and its new 20in RAYS forged alloys have heralded some pumped up wheel arches, for instance, while the propshaft has been considerably shortened due to the Juke’s shorter wheelbase. Impressively, this has been done without confusing the GT-R’s complex computer system. The interior has also required an overhaul, the driving position forced back by the bigger engine while space on the dashboard has been cleared for the GT-R’s 7in LCD display screen. The Juke’s trademark motorcycle-inspired centre console is set to remain, though, despite the addtion of an FIA-spec roll cage and a pair of racing seats and harnesses up front. The RML team were responsible for the rather excellent Nissan Micra R a few years ago (read evo’s long-term experience of the car here) and we’ve every expectation the Juke-R will be just as accomplished. One of the RML test drivers even suggested its lighter weight and smaller footprint make it more fun and wieldy than a regular GT-R. We look forward to finding out for ourselves… Behind the scenes news on the Juke-R's development in evo 163, on sale Weds October 12 See more on the Nissan Micra R here We review the Nissan GT-R and Nissan Juke