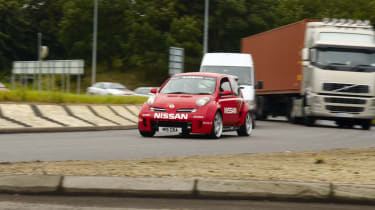 It’s fading now. Just. That dull ringing somewhere deep in my eardrums, an echo clinging to my senses even though the noise itself is long gone. The only thing is, I don’t want it to fade, because that means it’s gone for good. That noise, the heat from the 3.5-litre V6 dissipating into the Recaro and the small of my back, the sensation of the car wriggling and squirming. The Micra 350SR may have been the maddest long-term test car we’ve ever had, but it was probably the most fun too. I want it back.

When Nissan said its unique, RML-built Micra was knocking around with little to do, it was impossible to resist offering it a home. I’d driven it before, when it was called the Micra R and it had a four-cylinder Primera Touring Car engine fitted, and it was hilarious – deafeningly loud and fearsomely oversteery, with a cabin rich with exhaust fumes. ‘Dizzying’ was probably the best word to describe it!

With a more broad-chested 350Z-sourced V6 installed (complete with Nismo cams and induction), a new bulkhead separating driver from engine bay, and a six-speed H-pattern ’box taking the place of the sequential dog ’box, the rechristened 350SR looked like it would be a more usable proposition, albeit still with a manic edge.

When John Barker and I collected the mid-engined Micra from RML we did a pretty good job of not giggling like schoolboys as we were shown round the car. However, as soon as we got our hands on the keys our veneer of professionalism peeled back and we just cracked up. It seemed impossible that this beautifully prepped concept racer was ours to do with what we pleased for the next few months. The moment John pressed the big red starter button and the V6 whooped into life, the Micra dug even deeper into our affections.

Dynamically the 350R was, erm, challenging. However, there were some things it did extremely well. The steering, for example, was wonderfully detailed. It was also light and maybe not quite as quick as you’d expect, but well matched to a chassis that demanded smooth, considered inputs. Big Brembo brakes gave you real confidence too, and the gearshift had a short, chunky, mechanical throw, the lever mounted high up like one for a sequential ’box. Only a Countach-heavy clutch made changing gear anything less than a joy.

But the overwhelming ingredient of the package was the 320bhp 3.5-litre V6 engine. Barely silenced and married to short gearing, it was capable of shoving the Micra along at an alarming rate and the noise it made was simply phenomenal – louder than a Scuderia, angrier than a GT3 in full flight. As Barker said: ‘At full revs it’s like being locked into an engine test cell, the motor running on open exhausts and being tested to destruction.’ There’s a video on evo.co.uk of the Micra. Ignore the idiot behind the wheel and just listen to the noise. I guarantee that by the end of the clip you too will want a 350SR.

What was it like to drive? Well, with that big V6 sat pretty high in the chassis and a relatively short wheelbase, the transition from grip to slip was sudden and unpredictable. RML curbed the potential for roll oversteer with a very stiff set-up at the rear, and to a large degree it was successful – when the rear did lose traction it was the inside wheel that tended to spin-up harmlessly. Pushing harder into a corner, the car would understeer first, then, as you approached the apex, the front tyres would grip again and the rear loosen quickly. Corrections would need to be decisive, but even then the resulting slide would always feel snappy and clumsy.

An outing at Donington showed that the Micra only got more hairy as speeds increased and you leaned on the chassis all the way through a corner. Sometimes it would understeer and then snap sideways at the exit, other times it would pitch into a corner already on opposite lock even though you thought you’d done everything just as before. And that’s in the dry. When it was wet you just wound things back and enjoyed the sensations that tingled through the Micra rather than attempt to use its 320bhp to the full.

Despite all this – maybe because of it – the Micra was terrific fun, and for a car with a full roll-cage and extinguisher it was as happy pottering in town as skimming through the countryside scaring wildlife. If it wasn’t for that heavy clutch it would have been a pretty compelling everyday proposition. OK, so there was no boot, fuel consumption was in the low teens and you couldn’t hold a conversation over the engine note, but it coped with cold, rain and big mileages as comfortably as, say, a Caterham R400. And it always left you with a smile on your face.

The 350SR’s total reliability was remarkable and a credit to RML, and the sheer absurdity of the concept is a credit to Nissan GB’s imagination and resources. I’ll never forget walking out to the car park, seeing the Micra caked in winter grime and knowing that I had the key to that mad little car in my pocket. It was like living with a little supercar. It’ll be sorely missed.