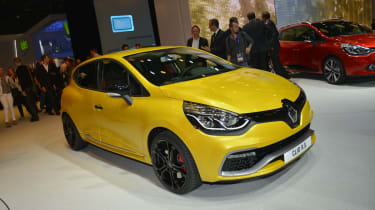 Renault has revealed the next great hope for the RenaultSport brand, the Clio 200 Turbo. As previously reported, the 200 Turbo will feature a 1.6-litre turbocharged engine, and will only be offered with Renault’s EDC dual clutch transmission – and Renault has no plans to offer a manual in the future.

The company has given up on the three-door Clio in an effort to save on development costs, which means it will be the first RS Clio to feature the five-door layout.

Styling differs from the standard model, also revealed at the show, with the addition of a rear diffuser, and lower sporty-looking front bumper and 17 or 18-inch wheels. The diffuser is said to add 80 percent more downforce than the standard car.

With no option of a manual gearbox, RenaultSport has developed its very own six-speed dual-clutch transmission named EDC. The gearbox allows a mixture of fully-automatic, or manual control via steering wheel paddles. When the car is in 'Race Mode’, the most extreme of three settings, it can shift in just 150 milliseconds.

The 1.6-litre turbocharged engine, borrowed from the Nissan Juke and heavily upgraded, is currently unique to the RS Clio, developing 197bhp at 6000rpm. The big news is that with the loss of the normally aspirated engine, there comes more torque. 177lb ft is available from 1750rpm all the way through to 5600rpm, which will put an end to the rev-hungry nature of the outgoing Clio – which delivered its 158lb ft at 5600rpm.

It’s also a much cleaner and more efficient engine, producing 25 percent less emissions than the outgoing Clio. To satisfy different customer demands, there will be two chassis options available from launch, the standard Sport chassis, and the 15 percent stiffer Cup chassis.

Following a growing trend in the industry, the Clio will also be fitted with a new system called R-Sound Effect. This is said to simulate various different iconic engine sounds, pumping them into the cabin through the car stereo.