The development boss of Renaultsport has defended the decision to switch the next generation Clio RS to a turbocharged petrol engine. 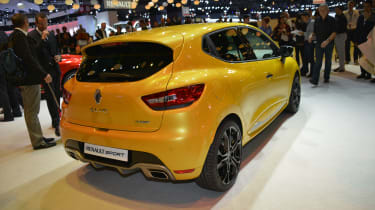 The development boss of Renaultsport has defended the decision to switch the next generation Clio RS to a turbocharged petrol engine.

‘We chose the 1.6 turbo for many reasons,’ Christophe Besseau told evo at the Paris motor show, CO2 and fuel economy were two of them, but so was performance, and the driving pleasure of the immediate torque.’

The Clio gets a version of Nissan’s 1.6-litre turbocharged petrol engine, and although its 198bhp output is more than in the standard Nissan Juke DiG-T it will be matched by the forthcoming Juke Nismo (which also made its debut in Paris.) Despite the two cars’ close mechanical relationship, Besseau insisted that there was only ‘limited contact’ between the two development teams.

Besseau was also predictably keen to justify the decision to only offer the Clio with a twin-clutch gearbox, telling evo that ‘this will be a first for Renault.’ There are no plans to offer a manual gearbox with the RS Clio, nor a stripped out ‘Cup’ version – instead the firmer ‘Cup’ chassis settings will be an option on the standard car.

evo also learned that the RS Clio will have a three mode dynamic selector switch, with standard, ‘sport’ and ‘race’ settings. The only way to fully deactivate the stability control will be to switch this into ‘race’, which will also alter the throttle mapping, gearbox software and the assistance of the electric power steering system. Let’s hope that the finished article doesn’t lose the driving purity that’s made previous RS versions of the Clio firm evo favourites.

‘It’s very important for us to be in the top three,’ Besseau told us, ‘but preferably the top one.’