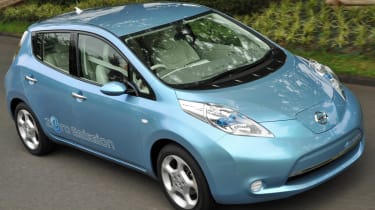 Nissan has unveiled this, the Leaf electric car.

While it’s not our usual sort of thing, it does represent the first big step towards usable electric vehicles, and shows that a future of plug-in cars isn’t something to fret about.

First off, it looks pretty smart – a technological take on the five-door hatchback, with LED lights, flowing lines and elements of current Nissans built in for good measure.

It gains an entirely new platform, with its battery pack (containing 48 individual lithium ion battery modules) positioned underneath the cabin floor. Together they weigh 270kg and can hold 24kWh of energy.

They power an electric motor that provides 107bhp, but perhaps more importantly, 207lb ft of torque that’s effectively available from zero revs. As well as making acceleration brisk (0-62mph will be sub-10sec), it means the Leaf will be a much more usable car in town. That’s where the majority of these will spend their lives – the range between charges is currently estimated at around 100 miles.

That’s still a vast improvement on other electric vehicles, though, and should be more than enough for a few days of the average British commute. A quick charge to 80 per cent of capacity can be done in half an hour, but a full charge still takes around eight hours.

Still, with proposed government EV rebates the Leaf should compete with your average diesel Focus or Golf on price while dishing up much lower running costs and a real taste of the future. Manufacture of the car’s lithium ion batteries will take place in the UK, too, at Nissan’s Sunderland plant, creating a host of jobs at the same time. The North East will also be set up as the country’s first low carbon vehicle area, with 750 charging points and an infrastructure in place to make the Leaf a realistic choice. It’s set to arrive in American and Japan next year, with European sales by 2012.