The Nissan won't win over neighbours with its noise in the morning, but the local toms love it... 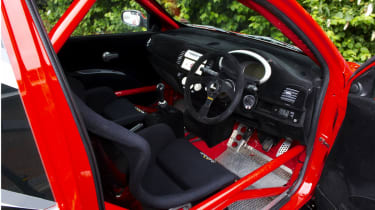 The mornings are getting cold. Frosty too. Makes you glad we no longer have to start our days by breaking the ice in an outside lavatory. It was just such a crisp morning when I walked out to the Micra to be hailed by a muffled meow. A brief inspection revealed that the 350SR had acquired an extra cat overnight: the local ginger tom, sitting proudly inside the back of the car atop the 3.5-litre V6. The engine bay has no floor to speak of, so Whiskers had clearly climbed onto the warm engine after I returned home the night before. Sensible chap.

Once the feline element had been removed, I filled the passenger bucket seat with everything I’d need over the next few days: all my racing gubbins, plus enough clothing to see me through eCoty. It was a bit like trying to get a tent to go back into its bag. This Micra is not a GT.

Nonetheless, a couple of hours and two fuel stops later I arrived at Brands Hatch, where I was driving our 350Z racer in the final round of the Dunlop Sport Maxx Cup. Racing drivers generally exercise a carefully studied indifference to other cars in the paddock, but the Micra had a continuous stream of sunglass wearers wandering up to it and saying things like, ‘Blimey, it really is in the back.’

Little did they know that the Nissan they should have been paying homage too was not the Micra, or the 350Z, but the big, tatty Patrol used by the boys from RJN Motorsport. If you look closely you can still see the faded patches on the red paintwork where the stickers used to be – for three years it was a support vehicle on the Paris-Dakar.