Making the most of Le Mans

Plus, We Are Racers Ep 1 Video 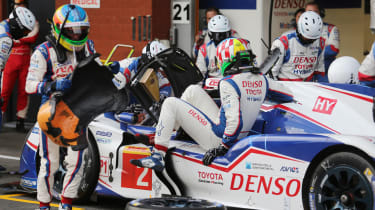 Of course you could rock up to a nice, comfortable chateau when you arrive at Le Mans – but where’s the fun in that? So camping it is. Even if you don’t like tents, the party atmosphere of the campsites is worth the discomfort and you get to meet all sorts of interesting folk from across Europe who share a common passion – cars and motor racing.

Plus you can savour a beer or several knowing that you don’t have to drive anywhere afterwards; and even when the race is on, it can take a considerable amount of time to get out of and then back into the circuit, if you’re billeted off-site.

Then there’s your close proximity to the action on the track. It’s never far from the on-site campsites to spectating areas, and if you get weary of the cars howling past, you can easily retire to your bed for a refreshing snooze. You’ll appreciate the ability to do this most during the early hours of the morning – watching the racers thunder through the night is great for a couple of hours, but you’ll probably find you reach a limit… 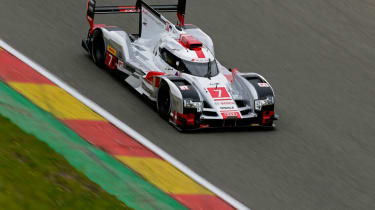 At some stage during your long weekend at Le Mans, have a stroll through the car parks and some of the other campsites – the selection of top quality, exotic metal on display is the equal of any international motor show, except that the cars are parked out on the grass amidst humdrum saloons and hatchbacks.

Before you set off for Le Mans, print off a map of the circuit from the official website, www.24h-lemans.com. This has the spectating areas marked on it and will give you some idea of just how far apart some of the corners are… This is a mighty big track. And on that subject, remember to pack sturdy, comfortable footwear. Also useful if you intend hiking between far-flung corners is a small rucksack in which to carry snacks, drink, jumper and waterproof – conditions can be very changeable during the race, and just ‘nipping back to the tent’ may not be an option. 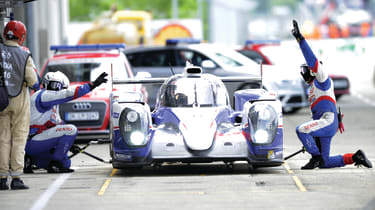 Take some ear protection, too, either plugs or full-on ear defenders. The hybrid LM P1 cars may lack the aural magnitude of Le Mans racers of yore, but many of the GT-class machines still bellow like banshees.

About 20 minutes after the race starts at 3.00pm on Saturday afternoon, you’ll probably have no idea what positions the racers are in. And that’s when two media sources become your friends. Firstly there’s Radio Le Mans, that offers continuous live feed from the race – if you’ve forgotten to pack a little radio to listen to it on, then the Radio Le Mans sales team are dotted all over the place to sell you a cheapo radio just for the event. Then there are the massive Michelin-sponsored video screens located at key points around the track. Not only do they display live feed, they also replay daring overtakes and other notable pieces of action – at Le Mans you can only ever see a small slice of the track, but the Michelin screens give you eyes on the whole circuit.

Le Mans has amusements – most famously its large Ferris wheel, from the top of which you get a brilliant view of the whole site – open-air concerts, shopping and other distractions, so go armed with plenty of (well secreted) cash. There’s food and drink on offer in abundance, but remember that this is a race track so it isn’t cheap… 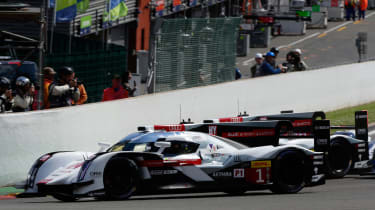 On the Friday there’s no racing, so the pit lane is open to the public from 10.00 in the morning to 8.00 in the evening – you probably won’t see any of the drivers, but it’s the closest you’re likely to get to the cars and often the mechanics are hard at work making final adjustments. And the Le Mans pit lane is a strangely evocative place just to be standing, so make the effort to go.

Friday also offers some non-sanctioned entertainment, as evo reader Dion Price explains: ‘You may have heard of Mad Friday – with a complete absence of track action at Le Mans the day before the race, the devil makes work for idle hands to do… All along the supply roads that ring the circuit, drive-by Super Soaker attacks compete with riot spec water cannon to keep the crowds cool as they casually halt traffic to demand burn-outs, 0-40-0 sprints, and other general vehicular tomfoolery. Silly stuff, but a Le Mans tradition.’

Another tradition is the drivers’ parade in downtown Le Mans, complemented by a huge gathering of classic car clubs from around Europe. It’s worth the excursion but you do need to get there early – crowds are estimated to be in the order of 150,000 people, which can make parking a tad tricky. 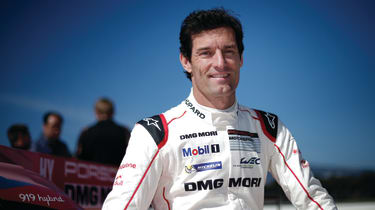 Back inside the circuit there are several live concerts on the Friday evening: you can find details of who is playing at www.24h-lemans.com.

If you’re not up early on Saturday morning then you’ll receive a 9.00am alarm call in the form of the 2015 Le Mans grid taking to the track for a 45-minute warm-up. After which comes the stirring sights and sounds of the Le Mans Legends storming around the circuit and reminding us of the iconic race cars that got us all interested in the famous 24-hour race in the first place. Following that, an Aston Martin support race should get you in the mood for the competition that is soon to begin.

And then at 3.00pm on Saturday afternoon the grid will be full once more, and the lights will go green…