The tyres of Wales Rally GB

Wales Rally GB closed off another fine WRC season, but Michelin's engineers will use the knowledge gained to improve tyres for the future

Michelin are the recognised masters of rallying. Since the world championship began in 1973, they have scooped 48 titles: 23 drivers’ crowns, and 25 manufacturers’ titles. All together, that’s over 250 individual World Rally Championship victories, including that very first event, the 1973 Monte Carlo Rally. Jean-Claude Andruet was the victor on that occasion, at the ‘wheel of an Alpine A110.

Jaques Morelli heads up the Michelin effort at each WRC round, leading a team of approximately 20 technicians and support staff. Around 1,000 tyres are brought to each rally, transported in four large trucks that also bring a mobile office for the event. 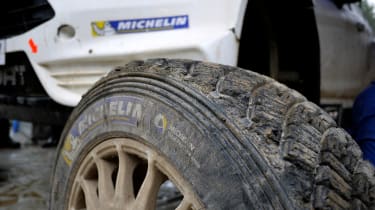 With rounds of the World Rally Championship held all over the globe, one of the major attractions of the sport is the variety of terrain, road surface and weather conditions the teams have to drive on. As such, Michelin offers a range of tyres, with two different compounds available for each type: asphalt, gravel, snow and ice tyres, the latter featuring studs that, much like a football boot, can penetrate the hard surface and offer grip on seemingly an impossibly icy road.

These days, the rules surrounding tyre choice are tightly governed by the FIA, and the number of tyres used per car is strictly governed. No longer can teams cut additional tread patterns into the tyres to suit the prevailing weather conditions or road surface on a stage: the tyres the WRC tyre suppliers bring have to be truly versatile. 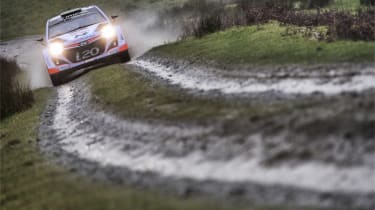 This year, once again, the British round of the World Championship took place in the forests of Wales, so Michelin supplied teams with two different compounds of gravel tyres. These tyres not only feature a tread pattern best suited to finding grip on forest tracks strewn with gravel, but are also extremely strong to negate the risk of puncture or other tyre damage from sharp rocks.

Given all the major teams in the WRC use Michelin tyres, it’s no surprise that with Sébastien Ogier’s victory, Michelin marked up another victory for their unrivalled tally. Moreover, the extreme conditions will have informed the very same Michelin engineers who are working on the firm’s next generation of road tyres.