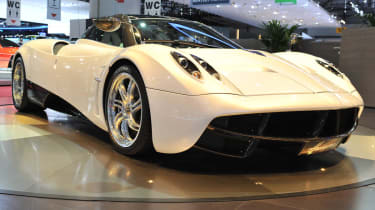 The handsome white Huayra that graced Pagani’s Geneva motor show stand last month was due to go to its new Middle Eastern owner straight after the show closed on March 18. But evo has discovered the owner never took delivery of the car he ordered almost a year ago; another Middle Eastern buyer even more desperate to be the first owner of a Huayra than he was, eventually agreeing to pay a remarkable 1.8million euros for the car, representing a healthy premium of 900,000 euros, or double what it cost ex-factory.

We also understand the last Zonda F Roadster ever produced was recently sold by Pagani’s Swiss dealer for 1.3m euros, as was a ‘new’ 2008 Zonda F Coupe (to Japan) for 1.2m euros and a barely used, RHD Zonda C12S was sold by the factory for 700,000 euros.

Like the white Huayra going to the Middle East, all these deals represent a doubling in price over what these cars cost new. So it seems wealthy enthusiasts will pay what it takes to get their hands on a Pagani, just so long as they are still in ‘as new’ condition.