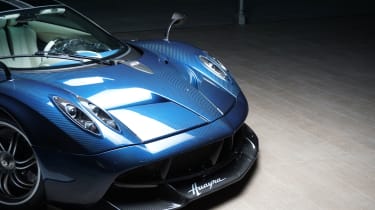 Pagani has released details of its latest car; a bespoke, one-off Huayra that takes inspiration form Pagani’s relatively short, but distinguished, history. If the pictures and video are anything to go by, the Pearl is a combination of exquisite details and exceptional craftsmanship; just what you’d expect from Italy’s most luxurious supercar manufacturer.

The overall shape might not look dramatically different from the Huayra but it took the design team at Pagani a year to pen. They worked extensively on the details and created a split rear wing reminiscent of the Zonda S, a roof mounted air intake similar to the one seen on the Zonda R and new front lip.

There is also a few more air intakes on the front and a functional looking diffuser at the back. It isn’t quite as imposing or as large at the one on the Huayra BC, but that's hardly an issue as plenty race cars would be shamed by the BC’s aero.

What’s most noticeable about the Huayra Pearl is the blue, exposed carbon fibre bodywork. And, as is typical of Pagani, the weave of each panel has been painstakingly matched to the neighboring panel, so there is a continuous pattern all over the car. 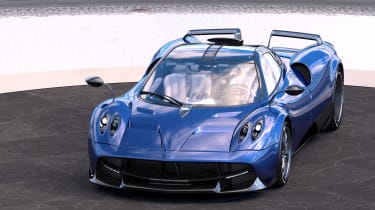 The interior is similarly special. The Huayra’s already extraordinary interior has been made with even more luxurious materials and put together with meticulous attention to detail.

If you consider the engine and gearbox as only one element each, then the Pagaini Huayra Pearl is still made up of over 5000 components. And each one of those will be of the absolute highest quality if Pagani’s previous cars are anything to go by.

Pagani has not confirmed any performance figures for the Pearl, but even if it’s the standard Huarya engine with 720bhp, rather than the BC’s 780bhp plus, it certainly won’t be slow.

Only one Pearl has been built as it was commissioned by a single customer, everything about it has been designed to suit the tastes of one person. The ratio between form and function within the Pearl is exactly what this customer wanted; more aggressive than an ‘ordinary’ Huayra but not as hardcore as a Zonda R.