With the long awaited C9 just around the corner, Pagani is busy building a last few one-off Zondas. 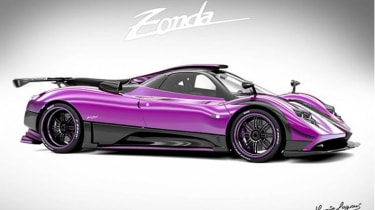 Zonda production should have finished some time ago but it’s as if the world didn’t wake up to this very special car until it was about to bow out of production. That and slight delays in the development process for the Zonda replacement, the C9, has meant Pagani Automobili have agreed to build a few more Zondas to satisfy demand from a growing group of enthusiasts who desperately want to own a one-off Zonda, named and built to their exact specification. They don’t come cheap though, evo understands the final prices average around £1.3M and that’s before import duties are added, which can double this price once they arrive in the country they are to be registered in.

The latest Zonda special is the Zonda 750, details of which have just leaked out onto the web. These images come from Pagani’s rendering department and were sent to the client in order for him to decide on the final colour specification. Having spoken with Pagani yesterday, I understand the final specification is far from fixed but there is little doubt that a car very similar to these images will get built.

Other specials currently in build include the Zonda HH (follow the build on an almost daily basis at www.zondahh.com ) for an American client. This car is a Zonda Roadster with a Cinque specification chassis and engine (but without the snorkel air-intake) and a manual gearbox. The build of this car is expected to be finished by the end of October.

Meanwhile, another special one-off Zonda is already with its lucky new owner. This version was called the Zonda Uno and was built for a member of the Qatar Royal Family who always paints his cars in a very distinctive blue. This car is basically the same specification as the Cinque Roadster but with a unique interior.

One of the first one-off Zonda specials Pagani agreed to do was built for a UK supercar enthusiast in 2008. He named the car the Zonda PS and was the first Zonda to be fitted with the automated manual gearbox that went on to become standard on the Zonda Cinque. Other unique features include a new exhaust design, which still has four exhaust outlets but these are arranged in a line along the rear of the car, rather than as a group of four.

Other Zonda specials include the ‘Zonda GJ’, which was built up from a Zonda C12S after it was damaged in an accident in Scotland back in 2009 and the Zonda Monza, which was a one-off, track-only special Zonda, completed in 2004 for an American client. Fitted with a dry-sumped version of the 7.3litre AMG V12 and tuned to produce 600bhp, this car gave Horacio the idea of creating the Zonda R. In case you fancy buying this piece of Pagani history, the car has just been offered for sale by specialist dealer, Obiukwu, based in Los Angeles, for an undisclosed sum.