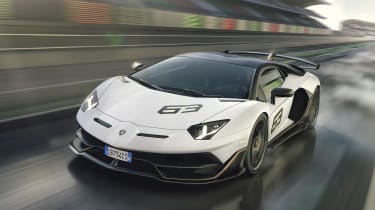 If Lamborghini was once known for a style-over-substance approach, the Aventador SVJ launched today at ‘The Quail’ in Monterey, California, is perhaps the best evidence yet that Lamborghini now prioritises ability as much as it does aesthetics.

Fresh from setting a 6:44.97 lap of the Nurburgring Nordschleife, Lamborghini describes the new SVJ - a contraction of Superveloce Jota, denoting high performance and track-readiness - as ‘the absolute pinnacle of our super sports car product range’.

In industry full of turbocharged powerplants, the SVJ is notable for its 6.5-litre naturally-aspirated V12 alone. In this installation, power has been massaged to an astonishing 759bhp at 8500rpm, with 720Nm of torque available at 6750rpm. Lamborghini quotes a dry weight of 1525kg - a function of the carbonfibre monocoque and liberal use of carbonfibre elsewhere.

Engine improvements include redesigned intake runners with a titanium intake valve, new intake ducts for the cylinder heads, and a lightweight exhaust system - with a design inspired by motorcycle technology, and exiting high up in the rear facia. The seven-speed transmission has also been fettled to handle the V12’s new output, and the all-wheel drive system can send 3 per cent more torque to the rear tyres than the previous Aventador SV.

Performance is unsurprisingly strong, with 0-62mph quoted in 2.8sec and 0-124mph covered in 8.6sec. Top speed is somewhere north of 217mph, while only 30 metres are required to brake from 62mph to a stop.

Beyond the powertrain, aerodynamics have been the main focus of the SVJ, realising a 40 per cent increase in downforce over each axle, while reducing aerodynamic drag by one percentage point.

This is in part thanks to the latest development of Lamborghini’s active aerodynamics system, named ALA (Aerodinamica Lamborghini Attiva) 2.0. The front end is now wider and features a “disconnected” front splitter to channel airflow, further enhanced by redesigned air inlets and aero channels across the body.

Improvements to the upper body aero contribute 70 per cent of the SVJ’s aero improvements while the final 30 per cent is down to underbody design, with front and rear diffusers, vortex generators and fins. Naturally, there’s an enormous ALA 2.0 carbonfibre rear wing too, plus larger cooling intakes for the engine and a carbonfibre quick-release engine cover.

Under the skin Lamborghini has worked to improve the Aventador’s chassis for the SVJ. Anti-roll bars are 50 per cent stiffer than on the standard Aventador. The magnetic dampers are 15 per cent firmer, too, with an eye on track performance, while the rear-wheel steering has been recalibrated to take account of the extra aerodynamic load and improved braking stability. The steering itself has been reworked to better match the SVJ’s higher limits, with a promise of improved steering precision and more natural feedback, and both ABS and ESP systems have also been tweaked.

The model appearing during Monterey Car Week will be a special edition SVJ 63. The unsubtle numbering is a reference to Lamborghini’s founding year of 1963, while the colour scheme will be unique to the special edition.