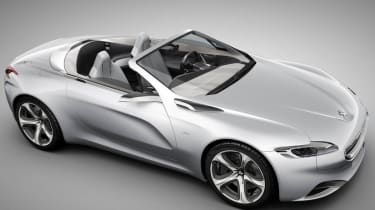 Is the Peugeot performance car back? Weeks after killing its GTI badge comes the French marques riposte to its increasing number of doubters. And what a response – the SR1 concept is a truly excellent looking concept car that promises much. There’s cues of Aston Martin Vantage, Citroen GT Concept and much more squeezed in there, and we’d be hard pushed to find fault with it styling-wise. The SR1 will be shown at the Geneva motor show in March and signals a new styling direction for Peugeot. It ain’t just style, though, there’s substance to back it up: hybrid technology combining a 1.6-litre turbo engine up front with an electric motor at the rear, offering up 313bhp alongside 58mpg and cheap tax, thanks to sub 120g/km carbon emissions. With both power units in action it’s four-wheel drive, while four-wheel steering also features.

While the SR1's at the concept stage for now, the Audi TT-rivaling RCZ coupe is a good-looking Peugeot that's due in the nearer future. Click here for details. That’ll be the first Pug to sport the brand’s refreshed Lion badge.

It doesn’t look the fiercest lion to us, sporting a bit of camp hand action rather than scary claws. So long as a production SR1 doesn’t reflect those qualities, though, then we’ll be very happy indeed. Keep your eyes on evo.co.uk for more news on the Pug SR1