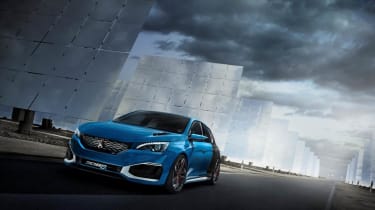 We first saw Peugeot Sport's mad concept hybrid version of the 308 hatchback at Goodwood - a car that emits only 70g/km of C02, yet can reach 62mph from a standstill in four seconds. Though the production-ready 308 GTi is currently hogging Peugeot's limelight, the 308 R Hybrid that sits beside it certainly still deserves our attention.

It's got three sources of power which can be used independently of each other. The fossil-fuelled 1.6-litre THP 266bhp engine seen in the RCZ-R is present, along with two electric motors – producing 115bhp apiece – fitted to both the front and rear axles. Top speed has been electronically limited to 155mph.

The car uses a six-speed paddle shift gearbox, but how exactly this works with the complex hybrid drivetrain has yet to be revealed.

As with other performance hybrids such as the BMW i8, the 308 R Hybrid offers a range of different driving modes. Hot Lap mode utilises all three power sources, generating the full 500bhp and 538lb ft of torque.

Peugeot claims that the decelerative force provided by the electric motors lessens the needs for drivers to use the four-piston 380mm front vented discs and 290mm rear, as the car stores this energy within the battery while slowing down.

In keeping with the car’s performance developments, the fast 308 has been pumped up for added visual clout. Revised front and rear bumpers provide cooling to the three separate powerplants, though the petite rear spoiler looks a little limp compared to the aggressive bodywork. Both front and rear tracks have been widened by 80mm to accommodate the 19in alloy wheels.

The interior, while similar to the regular 308 in layout, features four sports seats finished in what Peugeot calls ‘patinated leather’, with the steering wheel finished in perforated leather. A head-up display is also fitted.

Although it looks unlikely to go into production, the Peugeot concept definitely shows how serious the brand is taking its performance car intentions. And there's little doubt that the tech demonstrated here will find its way into future models - could we be looking at a not so distant future of hybrid performance Peugeots? Given market trends, it certainly seems plausible.