All about that bass: Peugeot Fractal concept enhances driving experience with acoustics

Acoustic technology takes Peugeot's i-Cockpit interior to the next level 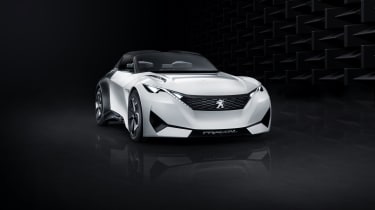 Concept cars are often seen as a styling exercise, but many manufacturers use them to preview technological advancements as well as aesthetic cues.

The Peugeot Fractal concept, seen here before its public appearance at the Frankfurt motor show, is just such a vehicle, and marks the next evolution in Peugeot’s ‘i-Cockpit’ cabin design first seen in the 208 supermini.

Fractal is, in Peugeot’s words, an ‘electric urban coupe’. It’s 3.81 metres long and 1.77m wide, shorter than a 208 by 15cm but about 3cm wider. Short overhangs and large 19in alloy wheels give it a more belligerent appearance however, and as the images show, the roof can be entirely removed.

Power comes from an all-electric drivetrain. An electric motor powers each axle, for all-wheel drive, and develops a combined power output of 201bhp.

With a 30kWh lithium-ion battery pack, range is 280 miles, but light weight – at 1000kg – has other benefits: The Fractal also sprints to 62mph in 6.8sec and covers the standing kilometre in 28.8sec.

In addition to the all-wheel drive setup, the concept rides on air springs, that can vary ground clearance between 7-11cm depending on whether the driver is negotiating bumpy, speed-hump-infested city streets, or is out on the open road.

But it’s the Fractal’s interior that yields greatest interest. A mix of white fabric, black oak and copper trim provides a visual feast, but from there the true concept car features come to life.

First of these is a steering wheel with integrated touchpads in each spoke, to control various functions inside the car. There’s a head-up display, projected onto a 45-degree polycarbonate strip at eye level, and an AMOLED touchscreen in the centre console, for further functions. 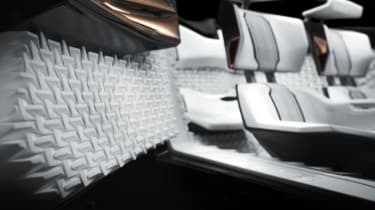 Many internal components have been 3D-printed, granting them unique shapes beyond the scope of current production methods. Notably, more than 15 square metres of the cabin are swathed in anechoic surfaces – necessary for the next step in the concept’s repertoire.

Peugeot has worked with StelLab, to create a 9.1.2 sound system for the concept, which uses virtual sound sources and projection to deliver different sounds to the driver. Navigation instructions, for instance, appear to emanate from in front of the car, moving closer as they become more urgent, and moving to either side depending on which direction the driver should go.

A tactile bass system sends bass frequencies through the driver and passenger seats, through the passengers’ bodies to the inner ear, rather than through the air – helping to eliminate exterior noise pollution from the vehicle. Five mid-range speakers, four tweeters, three woofers and an additional subwoofer provide other frequencies.

The only exterior sound is deliberate – special sound signatures to alert pedestrians, cyclists and other road users to the car’s presence. All the while, the driver seat also provides kinaesthetic, tactile feedback to enhance the driving experience.

Peugeot’s Fractal concept will make its debut at the Frankfurt motor show on September 15. Head here for our full guide to other launches at the show.