Peugeot pairs crossover styling with RCZ R power and a hybrid drivetrain. It debuts at the Paris motor show 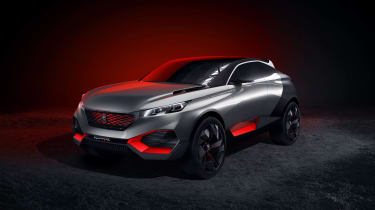 Each of the major French carmakers will show a hybrid concept at their home show next month, but Peugeot’s Quartz crossover concept is perhaps the most exciting from a performance perspective.

It eschews the ultra-mpg ethos of Citroen and Renault’s concepts, instead offering Peugeot’s take on a high-performance plug-in hybrid. The ‘eco’ box is ticked with a 31-mile all-electric range and hybrid convenience, but an engine and limited-slip diff snagged from the RCZ R coupe ensures punchy performance is also on the cards.

The 1.6-litre THP 270 power unit produces the same power here as it does in its usual home, with 268bhp and 243lb ft of torque. Unlike the RCZ R, it shares front wheel driving duties with an 85kW (114bhp) electric motor. This also charges the 400-volt battery pack during deceleration and fills torque gaps in the six-speed automatic transmission’s changes.

If that isn’t enough, another 114bhp electric motor between the rear wheels gives the Quartz part-time all-wheel drive and extra traction off the line – as well as a combined power output of almost 500bhp.

Read the specification sheet alone and you might picture a low-slung sports car, but the Quartz is actually a chunky, high-riding crossover based on Peugeot’s EMP2 platform, as found under the 308. MacPherson struts suspend the front end while a multi-link setup houses the rear-mounted electric motor. Pneumatic suspension can raise and lower the car from 300 to 350mm, using the car’s satellite navigation to prepare the chassis for the road ahead.

Styling echoes recent Peugeot trends, including an aggressive honeycomb grille, centrally-mounted lion emblem and slim headlights. 23-inch wheels and a narrow glasshouse give the Quartz a hint of the 2008 DKR, while all-LED headlights contribute to its efficiency mission. Exterior surfaces are swathed in mineral grey and matt black paintwork, with red highlights.

Inside, the Quartz adopts another recent Peugeot norm, ‘i-Cockpit’.  This puts a small-diameter steering wheel below high-mounted instruments, and simplifies interior controls.

Materials and structures are a mix of leather, composites and a new digitally-woven textile, that reduces production waste to nothing. Access is via a pair of scissor doors, while all four passengers get individually-molded bucket seats.

The 2014 Paris motor show opens its doors to the press on October 2 and public on October 4, running until October 19.