Sébastien Loeb teams up with Peugeot for 2016 Dakar

Before they head to Dakar, Loeb and his fellow Peugeot drivers will head to the Rallye du Maroc next month. The event will present the team with its last chance to practice as an outfit ahead of the Dakar.

'The Dakar is completely different from the racing I’m doing at the moment,' says 41-year-old Loeb. 'It will be very long, over two weeks, and you need to have the endurance to look after the driver and the car. It’s another approach to racing but I’ll discover that in January.' 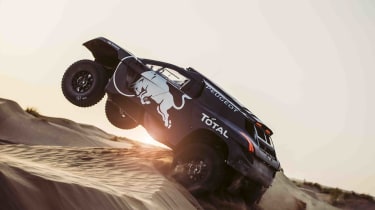 Loeb, who is currently racing for Citroen in the WTCC, first sampled the 2008 DKR16 back in June. But despite having more than 15 years of rally experience to draw from, the Frenchman expects the purpose-built 2008 to be a very unique challenge.

'What struck me most of all is how the Dakar car was a completely new experience: in the WRC I have been used to going round obstacles but with this car you can just drive straight over them, and it takes some time to have the confidence to believe it! I’ve also been used to having very detailed pace notes: in Cross Country, you have to find the road for yourself and improvise your route. And this is actually the first time I have driven any type of diesel car in competition too. So there is a lot for me to learn, but I am eager to find out more.'

Peugeot struggled with its 2008 at this year's event, with all of its entries suffering mechanical failures. But for next year, the car has been updated into DKR16-spec, so the team will be hoping to challenge the likes of MINI and Toyota for the win.

The 2008 is unlike its main rivals with its rear- rather than four-wheel-drive layout. The main reason for this less conventional layout is to save weight and it also permits a shorter front overhang, allowing the 2008 DKR to ascend and descend steeper angles. 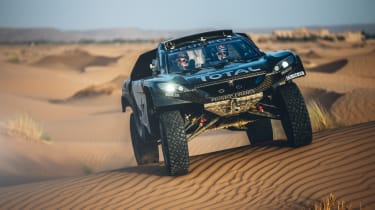 But the biggest gains come from relaxed technical regulations for two-wheel-drive cars, designed to help close the gap between two- and four-wheel drive machines. They enable Loeb and his teammates to continually adjust tyre pressures with a remote system, and also permit the fitment of larger 17-inch wheels and use of lengthier suspension travel (up to 210mm more) - allowing for much harder jumps and bumps to be absorbed.

Though it shares its name and a few body lines with the 2008 crossover, the 2008 DKR16 is a purpose-built Dakar car. It's powered by a mid-rear-mounted 3-litre V6 twin-turbo diesel that produces about 340bhp. The 2016 car is around 20cm longer and wider than its predecessor.

The last time Peugeot won the Dakar was in 1990 with four-time winner Ari Vatanen behind the wheel of its 405 T16. Can Loeb take Peugeot back to the top 26 years later? We'll find out when the 2016 Dakar takes place in South America between 3-16 January.