The wraps come off Peugeot's 208 GTI hot hatch concept. The modern day 205 GTI we've all been waiting for? 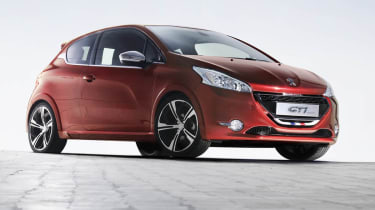 Peugeot will preview its new 208 GTI hot hatchback with a Geneva motor show concept. But we can expect a production version by the end of the year with few changes, as it looks pleasingly showroom-ready. While ‘reborn 205 GTI’ clichés are all too easily rolled out when a performance Peugeot is unveiled, they’re very hard to ignore this time around. Peugeot itself is heavily encouraging such behaviour; its press release happily namechecks the 1980s hot hatch icon, while the ‘GTI’ badge on the 208’s rear quarter panel is an unashamed nod to its ancestor. The 208 is also significantly lighter than its 207 predecessor, helping edge the hatch back to its roots. And after the underwhelming 206 and 207 GTIs, the new 208 could be the return to form we’ve been waiting for. The front wheels are powered by the same 1.6-litre turbo engine as Peugeot’s top-spec RCZ coupe. Maximum outputs of 197bhp and 202lb ft should help hustle the wee 208 to 60mph in under seven seconds, keeping it competitive with its rivals – the Mini Cooper S, Vauxhall Corsa VXR and new Ford Fiesta ST and Renaultsport Clio – which will all boast similar 1.6 turbo fours by the time the GTI’s on sale. There’s a six-speed manual gearbox – no mention of a paddleshift automatic just yet – while the brushed aluminium interior is said to be very driver focused, possessing Peugeot’s smallest steering wheel in years. Here’s hoping its rack has more feel than the RCZ’s. There’s also Nappa leather sports seats plus plenty of Alcantara and LED detailing, though some of this might not make it from concept to production. Chassis-wise, the GTI’s track widths are up 36mm over the standard 208’s, while there are 302mm brake discs up front, 249mm rear. Exterior highlights include twin chrome exhaust pipes, red trimmed alloy wheels and a subtle bodykit with a rear roof spoiler. Pricing and spec details will likely be saved for the production car’s reveal, but an £18,000 starting point will keep the 208 GTI competitive in class. Also on Peugeot’s Geneva show stand will be the 208 XY (pictured, purple), which gets trick ‘pulsion’ paintwork whose appearance changes as you walk around it. The interior is also strikingly clad and gets an ambient lighting setup. It previews a Citroen DS3-like personalisation scheme that could help take Peugeot’s supermini more upmarket.