Peugeot unveils its 208 R2 rally car, the first of a trio of motorsport versions of its new supermini 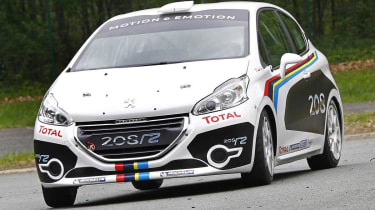 Peugeot has announced the first of three 208-evolved competition cars. The car in question is the 208 ‘R2’ rally car. It will be campaigned as a ‘zero’ car (it won’t be timed, but will open the stages) on this month’s Tour de Corse – the fourth round of the 2012 Intercontinental Rally Challenge – by French rally ace Stephane Sarrazin. Changes over the standard road car are the usual rally accoutrements. More power has been extracted from the 208 VTI’s naturally aspirated 1.6-litre engine, through variable valve timing and modifications to the intake system and exhaust. Thanks to these changes it now produces 185bhp – an increase of an impressive 65bhp. The engine is coupled with a five-speed sequential gearbox – identical to the one in Peugeot’s 207 S2000 machine. Peugeot has made numerous changes to the suspension. The most significant of these changes is the use of three-way adjustable dampers and a new hydraulic bump-stop designed by Ohlins. The introduction of hydraulic power steering, which replaces the road car’s electric system, will offer drivers increased precision and feedback, especially on rallying’s loose surfaces. The car is available to order from Peugeot as a kit, costing 37,500 euros – currently around £30,500 – or as a fully prepared car for 46,700 euros (£38K). The final two competition cars based on the 208 will be revealed later in 2012, one being a circuit based car and the other being a direct replacement for the four-wheel drive, 280bhp 207 S2000.