With luck, this is a taste of the next Pug hot hatch 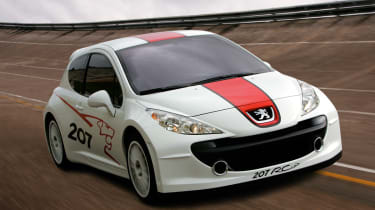 You’re looking at the Peugeot 207 RCup concept car, as revealed at this year’s Geneva show. It previewed Peugeot’s offering for the new Super 2000 rally-car class, in which various car-makers offer virtually turnkey cars ready to rally. The wide body, chiselled nose and aerodynamic addenda certainly look the special-stage part, and the version budding rally stars can buy from December will have a 280bhp development of the 206 GTI 180/Citroën C4 VTS 2-litre engine. Yes, yes, but is this also the new 207 GTI? It would be good to think so, as it looks yet more assertive even than Renault’s new Clio 197 and could mark Peugeot’s return to serious hot hatches. Trouble is, Peugeot still seems convinced the proper hot hatch market is dead despite contrary evidence from Renault, Ford, Honda, Vauxhall and VW, and the head of 207 development seemed at the mainstream car’s launch to abhor the idea of a hardcore version. He talked about safety and responsibility and how the old days were gone, and it all got very depressing. So now I’m sitting in the RCup at Montlhéry, the historic banked circuit outside Paris. There are no instruments ahead of me, just graphic motifs because this is a concept car, but further ahead is a tweaked 138bhp version of Peugeot’s usual 16-valve 1.6 (fitted to get the concept car moving decently). The 207 GTI, low-key as it may look, will have a 168bhp turbo version of the new PSA/BMW 1.6, with ample low-end torque in contrast with the rev-happy Renault rival, but the 138bhp motor will do for now. My mission is to detect any promising signs of rousing drive potential. The RCup sounds rorty enough through its four exhausts, and it pulls with the verve a stripped-out car should. This prototype is not yet calibrated for proper driving: the brakes are savagely over-servoed and the steering, though very precise, is way too light. But there’s a tautness and a wide-tracked, roll-free keenness to the way the RCup tackles curves, which really does feel something like the Clio 197’s dynamics. If little else, this proves there’s nothing wrong with a simple torsion-beam rear axle if properly set up. All we need now is for it to be attached to a genuine GTI.