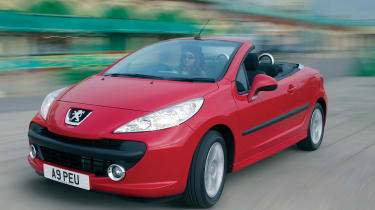 Funny how I seem to cover all the Peugeot launches. Especially as I've come down heavily in favour of the 207 GT THP 150, a car loved less by other evo writers.

Well, let me say that having now driven the THP a lot on UK roads, the electric power steering and the knobbly ride are starting to annoy me. How, then, will the new 207 CC fare under an objective gaze?

Its 206 CC predecessor, while hardly an evocentric car, spent much of its life as the best-selling convertible in the UK. The 207 CC looks ready to continue the theme, but this time the top model shares much mechanically with the aforementioned hatch. Hence this CC is also called GT. An entry-level Sport model gets the normally aspirated 118bhp version of the PSA/BMW 1.6-litre engine, while a 108bhp turbodiesel is also available.

This CC is built by Peugeot instead of being subcontracted to a convertible specialist, and it has plentiful stiffening members in the structure. The two-piece roof looks neat and folds/unfolds fully automatically, but when folded it’s almost impossible to retrieve luggage stashed below.

The really good bit is the way the CC drives. Its structure retains 80 per cent of the hatchback’s ample stiffness roof-up, 53 per cent roof-down, but even in the latter state it’s impressively free of shake and shudder – much more so than two other recent cabrios, the Alfa Spider and the Astra TwinTop. It steers and rides better than the GT hatch, too.

And here’s the killer fact. Before the CC I’d been driving a new MX-5, and was unimpressed (dead steering, noise, flat-feeling engine). I got into the CC and had a great time in every bend. That can’t be right, can it?