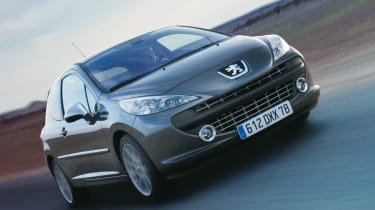 This is the car that Peugeot hopes will relaunch its fortunes in the hot hatch market. The new 207 GTI will have the 1.6-litre THP (Turbo High Pressure) engine that has already appeared in the new Mini Cooper S. As in the Mini, it produces 172bhp and a healthy 177lb ft of torque from 1600rpm, while in the top three gears the torque can temporarily be increased to 192lb ft thanks to an 'overboost' system.

Despite having only a five-speed manual, the 207 GTI still manages to match the six-speed Cooper S's 7.1sec 0-62mph time. Its top speed of 137mph is also on the pace.

In addition to revised spring and damper settings, the GTI will have a stiffer rear torsion beam and strengthened struts and ball joints up front. The electric power steering has also been recalibrated.

Visually, the GTI will be adorned with 17in nine-spoke 'Pitlane' alloys, a rear spoiler, twin trapezoid exhausts and satin chrome mirrors.

Expect to see it on sale from early summer priced at around £16K.