Peugeot has unveiled images of the 208 GTI, the company's return to the hot-hatch market - to be unveiled at the Paris motor show. 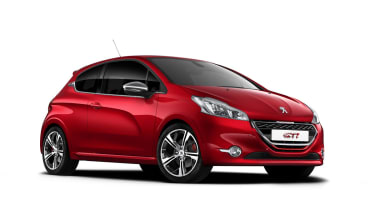 Peugeot has unveiled images and details of the new 197bhp 208 GTI, signalling the company's return to the hot hatch market. The new car will be officially launched at the Paris motor show, going into production Spring 2013.

The 208 GTI will be powered by the same 1.6-litre turbocharged engine, used in the Peugeot RCZ, Mini Cooper S and Citroen DS3 Racing. It's tuned to the same 197bhp as the top RCZ model and is mated to a close-ratio six-speed manual gearbox. 0-62mph is said to be less than 7.0 seconds.

Peugeot says that it has been working very hard on the chassis set-up of the 208, making sure the hot 208 lives up to what people expect from a GTI. The Springs, dampers and anti-roll bars have been uprated, but modifications go even deeper. The front subframe and rear crossmember have both been strengthened - which according to Peugeot's chassis engineers provides more controlled ride and handling.

The new 17-inch wheels, shod with 205/45 tyres, as well as suspension changes, give the GTI a wider track - 10mm front and 20mm rear. It looks very similar to the 208 GTI concept that was launched at the Geneva motor show earlier this year, with many of the design touches making it across to the production version.

A relatively low weight of of 1160kg means the 208 GTI produces just 145g/km of CO2, improving performance figures in the process. The interior will be well-equipped with brushed aluminium and red detailing, with plenty of leather trim.

Peugeot hasn't released any prices or specifications yet, but should do following the Paris reveal.