It's time for the Porsche Panamera, BMW M5, Jaguar XFR and Mercedes E63 AMG to battle it out on track at Bedford Autodrome. 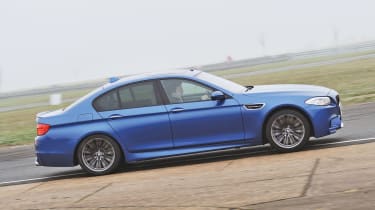 We elect to run all the cars around the West Circuit with stability control off to reveal the clearest picture of on-limit behaviour. With over 550bhp, I’m expecting the big BMW to struggle for traction, but after a steady out-lap it’s  clear the M5 is on top of its game.

The charge into the tight, second-gear hairpin asks a lot from the brakes, but there’s plenty of stopping power and the turn-in is responsive. Stability, bite and drive are words that define the M5’s behaviour into, through and out of the Palmer Curves, while Pif-Paf’s simultaneous demands of hard braking, turning and then a quick direction change are handled beautifully, with no unsettling turn-in oversteer. It’s a deeply impressive performance, resulting in a best lap of 1.25.7, although after three flying circuits the brake pedal becomes soft in depressingly familiar BMW style.

Next up is the XFR. The contrast is remarkable. The lack of grip is such that it feels like there must have been a downpour since we lapped the M5. The Jag simply can’t find any bite on its Dunlops and there are comedic levels of turn-in oversteer through every corner. The brakes have great power and consistency, and the supercharged V8 pulls with conviction, but the XFR simply can’t carry proper speed into or through the corners. Its best lap is a 1.28.2.

The Panamera S has a big power disadvantage, but it counters with plenty of mechanical grip. However, the chassis has a curious tendency to wind itself into a lateral jiggle as the outside wheels load up then unload. It causes the inside rear to spin, which feels a bit scruffy. The brakes are very impressive, but the manual gearshift can be awkward into the tight Bank turn. Its time of 1.27.3 is decent, but it’s not as much fun as we’d hoped.

The E63 is quick from the off, but in traditional AMG fashion the transmission isn’t suited to track work. Chassis-wise it’s a softer car than the M5, with more propensity to understeer on the way in and oversteer on the way out. It’s a valiant effort – with a 1.26.8 lap, it’s second fastest – but the M5’s time is untouchable.