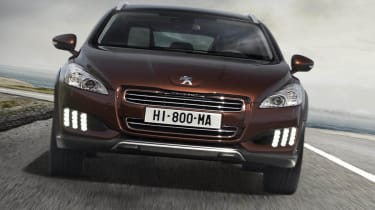 This is the Peugeot 508 RXH. It will be Peugeot’s top of the range hybrid, following the introduction of the 3008 HYbrid4 (the world’s first production diesel electric hybrid) in October. The four-wheel drive RXH will be unveiled at the Frankfurt Motor Show in September and will go on sale in spring 2012, and is set to be Peugeot’s most expensive model at over £30,000. A 163bhp 2.0-litre HDi engine powers the front wheels while a 37bhp electric motor takes care of the rear axle. The combined torque of the powertrain is an impressive 332lb ft, though it’ll likely have over 1.8 tons of Peugeot to shift. Claimed sensible figures are a combined consumption cycle of 67.2mpg and emissions of 109g/km of CO2. Mercedes-Benz, Volvo and Peugeot’s PSA sibling Citroen all have diesel-electric hybrids in the pipeline. Mercedes is set to launch the E300 BlueTEC, with a four-cylinder 2.2-litre diesel unit later this year. Volvo has no production plans yet for its V60 diesel hybrid, but the technology will probably appear in one of its models within the next two years. Citroen is set use the same hybrid technology as Peugeot for its new DS5, which goes on sale in early 2012.

Read our review of the Peugeot 508 diesel here