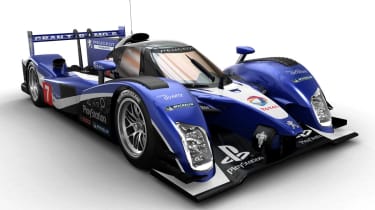 Peugeot has taken the wraps off its all-new endurance racer, the 908. It will do battle in the 2011 Intercontinental Le Mans Cup (ILMC), the highlight of which is the Le Mans 24 hours in June.  Despite winning the inaugural 2010 ILMC title with the outgoing 908, Peugeot Sport’s Le Mans 24-hour race was beset by technical issues, all three of its cars dropping out before the chequered flag and handing the headline victory to Audi. The 2011 car is an all-new design, but Peugeot has chosen to retain the 908 badge due to last year’s series victory. A raft of rule changes for the 2011 season has brought about a thorough redesign and a shift in emphasis from power output to aerodynamics. V10 and V12 engines have been banned, forcing Peugeot to work hard on the car’s aerodynamics, drag and downforce. The latter has been significantly reduced to counter a 150bhp deficit brought about by switching from a V12 HDi to a V8 HDi unit, and to maintain a high top speed. The power unit, which develops 550bhp, is a 3.7-litre V8 turbodiesel with the same FAP (particulate filter) technology that Peugeot Sport has used for the past five years on its endurance racers. A closed-cockpit design remains, too, which provides better driver safety and no discernable trade-off in aerodynamic performance over an open cockpit car. Audi recently announced a switch to closed cockpits upon unveiling its 2011 R18 TDI racer – details here. The 908 has seen extensive testing on track, and will have completed twelve full tests at a variety of circuits by the time the Le Mans 24-hour race takes place in June. The team’s driver line-up remains unchanged. Oliver Quesnel, director of Peugeot Sport, indicates an intention to battle hard for the Le Mans crown this year, using a three-car line-up at Spa-Francorchamps as a ‘dress-rehearsal’ in May. Audi’s new R18 will also be raced competitively for the first time at the Belgian round of the ILMC, which takes in a total of seven races including two in the USA and one in China.  Peugeot Driver line-up for Le Mans 2011: Car No7 – Alexander Wurz / Anthony Davidson / Marc GenéCar No8 – Franck Montagny / Nicolas Minassian / Stéphane SarrazinCar No9 – Sébastien Bourdais / Pedro Lamy / Simon Pagenaud