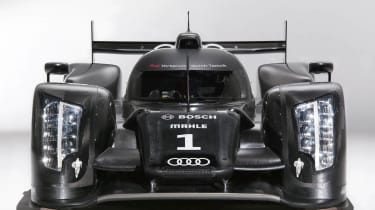 Audi has unveiled its new R18 TDI racing car. It will compete in 2011’s Intercontinental Le Mans Cup (ILMC), the headline fixture of which is, of course, June’s 24 hours of Le Mans. Four-ringed sports cars have been racing at La Sarthe for over ten years now, with Audis picking up nine victories from 12 races. In 2010’s race, an Audi driving team was on all three steps of the podium after a stunning 1-2-3 result. The all-new R18 racer marks a significant departure from its predecessors, which include the Audi R10 TDI and Audi R15 TDI – for the first time, an Audi Le Mans racer boasts a closed cockpit, coupe body-style. It’s due to the increased importance of aerodynamics, brought on by smaller engines. The competition’s rules have been tweaked to see engine downsizing and smaller power outputs – V10s and V12s have been banned, for instance – meaning the R18 possesses a 3.7-litre V6 turbodiesel.  This is the biggest displacement diesels are allowed to boast, while petrol-powered engines are limited to 3.4-litres naturally aspirated, and just 2.0-litres turbocharged. Current LMP1 cars (the highest class, and the one in which the R18 will compete) will still be allowed to compete but only with significant restriction, either by added weight or smaller air restrictors. Further details on the R18 TDI’s powerplant, including its power and torque outputs, are as yet unrevealed. Audi is understandably keeping its cards close to its chest until the R18 first competitively turns a wheel.  That will be on May 8 2011 at the six hours of Spa-Francorchamps in Belgium. Audi’s entry in March’s opening round of the ILMC at Sebring will consist of upgraded versions of the outgoing R15 TDI, to provide maximum development time for the R18 ahead of the high-profile Le Mans race in June. Read about the R18’s predecessor, the Audi R15 TDI We drive the Audi R10 TDI, one of Le Mans’ most successful cars