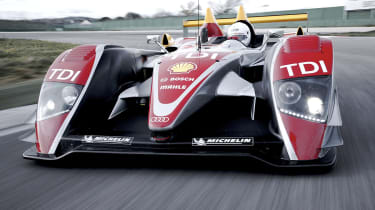 It may not have the romance of some the legends of Le Mans, but the Audi R10 is right up there with the greats. Think Porsche 956, Ford GT40, Ferrari 250, Jaguar D-type. I’m serious. The R10 won the world’s toughest motor race not once but three times. Not bad for a diesel. And you know what? Before it was put in a museum, someone at Audi Sport was barmy enough to risk strapping yours truly into last year’s winning car and cranking the power to ‘full qualifier’.

This is tense. All around me, the guys from Audi Sport’s German racing partner, Joest Racing, are busy making final checks on their precious baby. Squeezed into my lid, I can’t hear a thing – they’re in their world, I’m in mine. ‘Why did I have to be the first journalist to drive it?’ I fret. Still, if I bin it, at least I’ll have driven it. If I was last in the (admitedly short) queue, there’s a chance there’d be no drive at all…

Up onto the sidepod I step. One foot drops gingerly to the seat, followed by the other, and I lower myself into the depths of one of the most successful endurance racing cars in history.My eyeline barely clears the top of the shallow adjustable perspex wind-deflector, while either side my vision is restricted by energy-dissipating foam ‘collars’. My legs stretch out, near horizontal, my back tilted unnaturally, but the seat fits like it was tailor-made. Someone reaches in and straps me in place. It’s snug, cocooning and confidence-boosting – kind of what you’d hope for from a 230mph machine with no windscreen or roof.

I’m sat in silence. Nervous. Fidgeting. Reminding myself which switch does what, desperately trying to divert my mind from countless ‘What if…?’ scenarios. It’s no good. What if I stall it? What if I don’t shift up a gear with MORE than 50 per cent throttle, like I’ve been told to? What if the brakes – without any anti-lock safety net – lock-up and I skid past the corner, into the crash barriers? What if I spin off at the last bend of northern Italy’s Misano circuit, right into the pitlane wall in front of Head of Audi Motorsport Dr Wolfgang Ullrich? How personable will he be then?

And now my earpiece crackles into life. ‘Are you ready, James?’ It’s the voice of chief engineer Howden Haynes. This is it. The tyre-warmers come off and the car is wheeled out on trolley jacks. When the crew release them, the R10 sits momentarily on its air-jacks, then they too are released, the escaping air pressure causing the carbonfibre and aluminium honeycomb monocoque to shudder violently. The instructions come to fire up the engine. My heart is thumping. Ignition toggle pulled out and down. Check for neutral on the gear display indicator. Say a little prayer. Then punch the little black starter button…

The 5.5-litre twin-turbo diesel V12 jumps to life. I’ve been instructed to familiarise myself with the throttle for sensitivity. To my surprise, the engine flicks up and down the rev-range like a sewing machine. It’s so smooth. Responsive. Free from inertia. Even without moving away, it feels every inch the finely honed three-time Le Mans winner it is.

The first two laps are frustrating. I’m to follow a camera car at 50 per cent power, on wet tyres, so the Michelin slicks can be kept warm, ready for my four laps proper. With a firm shove of my left leg, the short-travel clutch sinks to the floor and the first gear engages with a clunk. The camera car is halfway up the pit lane by the time I’ve feathered the clutch and dialled in some rpm, and my heart feels as if it’s beating faster than the engine is turning over.

Time to catch up. I floor the throttle but, to be honest, at half-power it feels barely faster than one of the big-engined uber-diesels you’ll find burning up the autobahns in rush hour. The rest is all good though: a steering rack that darts from one full turn of lock to another without a hint of resistance, a throttle that translates the slightest pressure into forward momentum and a tightly wound drivetrain without a hint of slack.

Two laps later, I’m peeling into the pitlane. The air-jacks lift the car. Over the radio, Haynes asks if everything is OK. Then he leans into the cockpit and twists the engine mapping dial to position 1 of 12. ‘That’s full power, James. Exactly the same as the drivers use. Go carefully and enjoy it.’

With that, the warmed tyres are on and the air-jacks rumble again as the R10 TDI touches down. Brush the throttle, ease the clutch out. If I was nervous before, I simply can’t afford to be now. Concentrate, Millsy.

Four laps is nothing. Especially when you’ve only had five ‘familiarisation’ laps of a circuit you’ve not driven before, in an Audi S3. I need to know what it feels like, though, so halfway up the pitlane exit I floor the throttle in second gear and WHAM! the big V12 TDI compresses my chest and the gearshift lights cycle through green, amber and red. At the first blink of red, I shift to third and it hits me again – WHAM!

This is more like it; power that forces me to lift my eyes from the tarmac in front to the corners suddenly rushing towards me. It concentrates the mind like a knife to the throat, and that’s without a field of other race-cars bunched up around me, oil and debris on the track, rain, or backmarkers cutting across my racing line.

There’s a right-left flick at the end of the pit straight, followed by a long, arcing right-hander that widens to full throttle and another gear again before I have to stand on the brake pedal – wow, it needs a serious shove from your thigh muscles – and quivering fingers twice snap the left-hand gearshift paddle and the ’box drops with a rev-synced BANG, BANG into second.

In the fourth- and fifth-gear bends I’m not going fast enough to push the suspension and tyres to the edge of adhesion. Putting my faith in the R10’s aerodynamics, which earlier pinned regular pilot Dindo Capello to the asphalt as he rounded a fifth-gear kink at 163mph, is too big a leap for me: 125mph is all I can muster.

If anything, it’s the tight corners that will spit me off. In the second- and third-gear turns just one or two mph separate our speeds. The back wheels slip if I open the throttle too wide as the car fires out of each apex. That’s no surprise; within a split second of easing the throttle toward the floor, a faintly presposterous 1100Nm (811lb ft) is unleashed from 1000rpm, and no matter how steamroller-wide the Michelin slicks, containing all of that is a job for the ASR. Which, wisely, is most definitely ON.

Again, the throttle hits its stop and flashing LED lights pierce my vision. With both turbos on boost, the free-revving diesel should eat up its 5000rpm rev-range in a flash, but with its ultra-flexible torque delivery, Audi opted for a five-speed transmission to offset weight, so each gear ratio is longer than you’d expect.

But no matter where you are in the rev-range, the V12 punches the car down the road like a bouncer ejecting a drunken student from a nightclub. And with every upshift of the sequential transmission, the process starts all over again. Then there’s the sound. Sure, it’s quieter than petrol-engined race-cars, but from where I’m sitting it’s a mechanical melody, rising and falling, unlike anything I’ve experienced before. Capello says it’s drowned out on the Mulsanne straight. I’ll take his word for that…

At the end of the back straight, I try braking as hard as my left leg will allow. But no matter how much I push, I can’t generate enough pedal pressure to bring the wheels to the point of lock-up. As Capello later explains, legs are an area that need work at the gym. ‘The neck gets toned from all the driving, but the legs have to be strong for three or four hours at the wheel.’

The steering is easier, if a little light. Capello says it was the best compromise for the drivers – less fatigue, fast flick-on opposite lock to catch a tailslide and manageable in the high-speed turns where the bodywork’s aero package delivers up to 2.7g of lateral load at Misano.

The tub’s carbonfibre structure is incredibly stiff, giving the suspension the perfect platform to work from. As racing cars go, the Audi is no flyweight – the regulations at Le Mans, for example, dictate a minimum of 900kg. Nonetheless, it responds faithfully and feels encouraging as I grow more confident – at least in the bends where I can approach the threshold of grip. When I do, its natural tendency is to understeer, pushing the nose wide if you get heavy-handed with the throttle or carry too much speed into a bend. But in Misano’s two fast, fifth-gear kinks, my brain short-circuits. It can’t accept that I shouldn’t slow down. This is another world, where professional racers excel and mere mortals stumble.

And then it happens. ‘Box James. Box.’ The voice makes me jump. Then I remember the earpiece. I fumble around, the car coasting, as I look for the radio button. ‘Was that come into the pits?’ I ask. ‘Yes, pit on this lap.’ I’m gutted. That can’t have been four laps, surely?

Audi needs one more victory to overtake Ferrari for the second most wins in the 24 Heures Du Mans, after Porsche. This year its drivers have a new V10 diesel-powered race car, the R15 TDI. You wouldn’t bet against them. 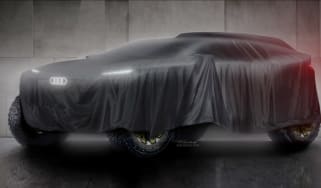