Peugeot has confirmed that it will be building a high-performance variant of RCZ, to be launched at the Paris motor show 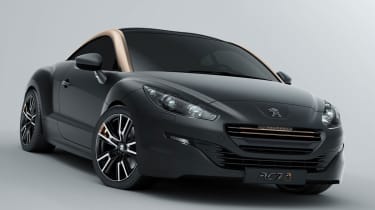 Peugeot has revealed the first images of the facelifted 2013 RCZ, which features a revised front-end treatment as well as  confirming that it will be producing a 260bhp ‘R’ version – on sale late next year.

On the show stand at the Paris motor show, the hot 'R' model has been developed in-house with help from Peugeot Sport, the company’s motorsport department. The RCZ R uses the same 1.6-litre turbocharged THP engine as the normal version – tuned to 260bhp, similarly to the DS4 Racing concept. CO2 emissions are expected to be around 155g/km.

The car remains front wheel drive, but Peugeot has fitted a Torsen mechanical limited slip differential, ensuring the power makes it road effectively. There will be other chassis tweaks, and styling modifications to be confirmed closer to production.

Changes to the RCZ range include new LED running lights, and updated headlights - and a slightly smaller re-designed front grille. It will be unveiled at the Paris motor show, along slide the new Onyx concept.