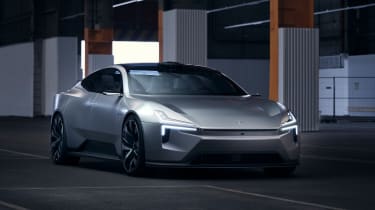 The Polestar Precept was first unveiled as a concept car earlier this year, itself forming a manifesto of Polestar’s future design and product direction. That model had been no more than a concept until now, as Polestar has announced its plans to put the Precept into production as a new flagship model that will rival other high-end EVs like the Porsche Taycan and Tesla Model S.

Rather than adhering to an SUV template the market apparently deems its preferred form, the Precept’s sleek four-door coupe bodywork and clean aesthetic was a refreshing look into what Polestar’s future could look like. Development is already said to be underway, with a brand new carbon neutral facility in China planned to produce it some time after 2023.

Thomas Ingenlath, Polestar CEO, said: ‘Consumers want to see change from this industry – not just dreams. Now, Precept becomes an even stronger statement. We are committed to reducing the environmental impact of our cars and our business. The aim has to be climate neutrality, even though I recognize that is a long-term goal.’ 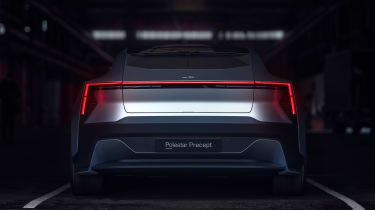 Compared to its first all-electric model, the Polestar 2, the Precept’s proportions are driven by a much longer wheelbase (up 365mm) and lower roofline, taking the form of a long, low-slung four-door GT, rather than the slightly odd high-riding saloon shape of the 2.

The crisp surfacing is pure Polestar, but the detailing shows a further step away from Volvo’s influence that Polestar is often criticised for. Instead, the Precept’s split headlights are driven by a new interpretation of the Thor’s Hammer headlight graphic, while the grille has been replaced entirely, now forming both a home for the concept’s safety sensors and driving assistance functions. There’s also a small slip vent integrated into that same space which attaches air to its body, forcing it up and over the windscreen – a similar trick to that found on the Jaguar I-Pace.

The flanks and glasshouse are highlighted by a broad and well-defined floating rear haunch that’s new for Polestar, again creating distance between it and Volvo’s iconic shoulder line that has driven much of Polestar’s aesthetic until now. From here the silhouette of the roof and rising haunch meet at the clean tail, which is defined by the lack of a rear screen – something that will proliferate across the industry at large now that wide-angle rear-view cameras are replacing traditional rear-view mirrors. Across the rear, the lower bumper’s tall diffuser and sharp rear lighting structure both clean the air as it leaves the car for maximum aero efficiency. 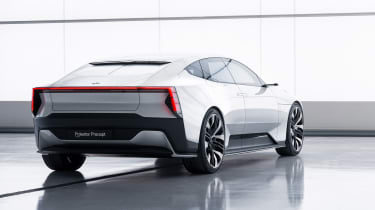 As well as previewing Polestar’s exterior, the Precept also gives us a glimpse at Polestar’s future interior design, this time mimicking the Polestar 2 a little more closely with plenty of concept-car glitter applied. The interior is dominated by a portrait-layout touchscreen interface that now floats from the multi-material, wing-shaped dash. Not dissimilar to that in the Tesla Model 3, Polestar’s inclusion of a second driver display mounted behind the steering wheel keeps it from being quite as stark as the Tesla’s cabin, so too the multi-level centre console. The Precept’s Android-designed user interface is much closer to production though, ready to be applied to the Polestar 2.

While there’s still a long way to go until it reaches showrooms, the Precept will follow a path already taken by Tesla and Porsche in establishing that consumers are willing to diverge from the SUV template that currently seems to be holding the entire marketplace hostage. With the Taycan currently on a waiting list, and a multitude of rival low-riding fastback saloons like Audi’s e-Tron GT and the Mercedes EQS all coming on stream in the next 12 months, the Precept will have its work cut out to compete in this burgeoning sector.