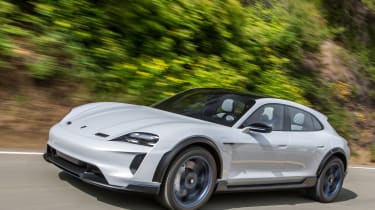 At Porsche’s annual press conference Porsche CEO Oliver Blume has confirmed the production of the E-Cross Turismo concept first shown at the Geneva Motor Show in 2018. The all-electric crossover will be based on the forthcoming Taycan saloon – to be revealed at this year’s Frankfurt Motor Show – and will arrive in showrooms by the end of 2020.

Similar in concept to the Panamera Sport Turismo, the Taycan Cross Turismo will be more of a lifestyle estate rather than a traditional family holdall. And while no specification has been confirmed at the time of writing, expect the second of Porsche’s all-electric cars to be closer to a crossover in concept than a full SUV.

Porsche’s entry into the electric vehicle market will begin with the introduction of the Taycan this autumn. The Taycan is powered by a pair of electric motors (one on each axle) and the company’s claims for it are typically performance focussed with the electric powertrain said to produce in the region of 400kw - 600bhp in old money. That’s enough to reach 62mph in under 3.5-seconds, 124mph in 12 seconds and top 150mph. Porsche claims, the Taycan will deliver this performance with the same repeatability as its combustion engine sports cars, suffering no power loss as the battery’s energy depletes. 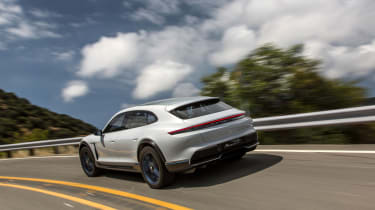 Underpinning the Taycan model’s electric drivetrain is a lithium ion battery that forms part of a powerful 800-volt electrical system. Porsche claims the Taycan will be able to travel 310 miles between charges, but crucially, the cells can be replenished in just four minutes to provide 100km of range.

As well as the performance levels Porsche also claims the Taycan will retain the driving and dynamic characteristics expected of its cars. Both the Taycan and the Taycan Cross Turismo will also over the latest connectivity functions, over-the-air updates, functions on demand and premium charging services both a home and on the road.

While the finite details regarding the cars’ interiors are still thin on the ground, the E Cross Turismo and Mission E Concept cars that have been doing the Motor Show rounds have provided some very strong indications of what to expect from Porsche’s first all-electric models. A new TFT instrument display linked to an eye-tracking camera could feature, with the set-up able to detect the instrument dial the driver is looking at and bring it to the foreground while minimizing the other instruments. The show cars have also introduced touch sensitive controls on the centre console and steering wheel, although we don’t expect the full cabin width TFT screen to make production.

What isn’t known at this stage is if the production Taycan Cross Turismo will retain the rugged approach of the E-Cross Turismo Concept with its tough-looking plastic wheel arch and sill extensions. Elsewhere, the E Cross concept features matrix LED headlamps with the firm’s X-Sight enhanced main beam function.

Porsche’s move into electric vehicles will see it invest €6 billion by 2022, including converting its existing Zuffenhausen engine plant to also build the Taycan’s electric drive units. There will also be a dedicated paint shop and assembly facility to build the four and five door electric cars. 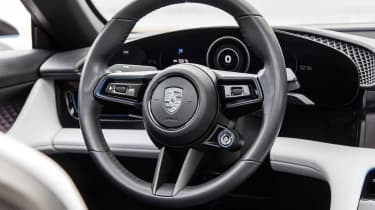 Nearly €500 million of the €6 billion investment will be earmarked for Taycan variants and derivatives, with a further €700 million to be spent on new technology, charging infrastructure and smart mobility. Development of plug-in hybrid models will also continue.

On top of its investment in e-mobility, Porsche will also invest €15 billion in new products across its portfolio by 2023.