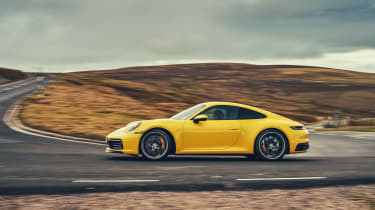 Previous generations of 911 cabin have each marked a big step up on their predecessors, and the latest 911’s is little different. The 992’s interior is classy, well appointed, solidly built and luxuriously trimmed, and can of course be enhanced even further with an almost endless list of optional finishes and accessories.

The basic design has certainly matured. Centrepiece is a three-spoke, 918-style steering wheel just like before, but also notable is the new instrument cluster, which comprises a traditional analogue tachometer (albeit quite different in appearance to previous 911 clusters), flanked by a pair of digital screens.

Porsche tradition continues in that the outer edges of these two screens are obscured by the steering wheel, but the information they present (from conventional trip computers to satnav mapping) is as clear and concise as in any other Porsche.

The rest of the interior takes several cues that were introduced with the current Panamera, from a flat centre console adorned with touch-sensitive switches, to the wide touchscreen in the centre of the dashboard. The environment is certainly more traditional than the Panamera’s high-tech approach, but quite different from the 991’s. Different too is the gear selector for the PDK, which is one of few areas to let the side down both visually and in terms of tactility – the small lever is nothing like as satisfying as the old pistol-grip affair.

The driving position is excellent, and as a 2+2 with a surprisingly large luggage area under the front cover, the 911 continues to offer more practicality than many cars you’d consider rivals. It’s a shame though that in the move towards a more GT-like feel, the old 911 bugbear of high road noise hasn’t been banished – it’s one of very few things that spoil the cabin ambience.