The Porsche 911. Some of you will probably own one of these. Lucky sods. A few more of you will have driven one at some point. But I'm willing to bet that most of you are just like me, a nine-eleven virgin. Of course over the last seven years I've read all about evo's love affair with Stuttgart's finest export (even been mildly irritated that it's won so many eCOTYs) so I sort of feel I know it already, but I want to drive it myself. I want to find out just why these guys love it so much. 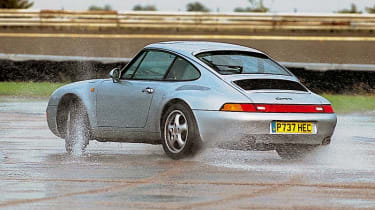 The Porsche 911. Some of you will probably own one of these. Lucky sods. A few more of you will have driven one at some point. But I'm willing to bet that most of you are just like me, a nine-eleven virgin. Of course over the last seven years I've read all about evo's love affair with Stuttgart's finest export (even been mildly irritated that it's won so many eCOTYs) so I sort of feel I know it already, but I want to drive it myself. I want to find out just why these guys love it so much.

What's more, I want a proper 911 experience, I don't want purists to say 'of course, that water-cooled, PASM-loaded 997 you drove is a bit of a pansies' car, not a real 911'. So when our air-cooled, upright-screened 993 sidled into the fast fleet car park it was an opportunity too good to miss.

There are, however, nagging doubts. The 911 has a reputation. I may be young, but I'm old enough to know that the 911 has inherent handling traits that have seen many a more experienced driver than me heading backwards into a ditch faster than you can say rear-engined, particularly if the roads are a little slippery. So I need help, and the man for the job is John Lyon. The ex-Para, who now runs the High Performance Car driving course, has won over 200 races, been an instructor at the police driving school at Hendon and once chauffeured Fangio. He first drove a 911 in 1965 and has been behind the wheel of pretty much every incarnation since.

We've got quite a day planned. Millbrook in the morning, then a dash across country to MIRA and the wet handling circles before chasing the light back to the office. Hopefully all before Harry leaves his inner sanctum and realises the 911 isn't in the car park. Best get on with it then.

So what strikes you in those first few miles of 911 motoring? Once you've settled into the slim-hipped seats, the rev-counter dominates the five circles in front of you. The floor-hinged pedals are positioned absolutely immaculately for heel and toeing - you almost feel the designers would be offended if you didn't. The smooth black steering wheel is upright and quite large of diameter, but it's slim enough of rim not to feel cumbersome.

The flat-six's bassy, hollow dubba dubba dubba seems to be right with you inside the cabin. It's so deep-chested you'd swear there are more than six cylinders back there. The engine continues to hold your attention too, because although at tentative speeds the 911 proves remarkably easy to drive, as you accelerate there's always the unusual sensation of someone pushing you in the small of the back. It's tractable too, but once the oil's warmed through and you head to the top of the rev-range, the exhaust note turns more metallic as it gulps in air; you're crossing the bridge to supercar pace.

The steering pad at Millbrook is essentially a barren concrete wasteland with circles within circles painted on its surface. The idea is to drive round and round like a dog chasing its tail and discover what the car will do at the limit with acres of run-off to inspire confidence. And what does the fearsome 911 do initially? Understeer. Between about 38 and 40mph the front end's limit is gradually breached. At first you can apply more lock and the nose will come back to you, which seems curious, but eventually it will wash completely wide. Apply more power and you just continue to rip tread off the front tyres. So you lift off. This is where things can become interesting. If you lift off gently then you'll bring it all back into line and continue going around the circle, making yourself dizzy. However, if you back off sharply and completely then even on the abrasive concrete the back end will swing around. You feel it coming, slowly at first as it gathers force. Then it tugs the back wheels loose. Lyon says you can prevent lift-off oversteer by instantly taking off an eighth of a turn of lock, but this has to be predictive rather than reactive and takes practice. It's initially easy to catch the 993 when it oversteers but the bite really comes if you don't straighten the wheel again quickly enough. Take the lock off again in a flash or the momentum will overtake you much faster than before and you'll be at the mercy of the pendulum behind you.

According to Lyon, the trick on the track is to brake hard into a corner, working the front-end grip to hook it into the turn, and then play a waiting game until the exit, when the wheels are straightening and you can use full throttle and all of the huge traction to push you down the next straight.

After a quick demo on the wonderful Hill route, it's off up to MIRA. For the sake of time-saving we take the M1 for a couple of junctions. Even here you realise the car is always talking to you. The steering is moving gently in your hands, the 911 stable yet fluid beneath you. The wind moves the car around as well, exaggerated by the weight in the tail.

The circles at MIRA are designed to simulate varying levels of slipperiness. The innermost is ice, then comes mushy snow, and finally a normal wet road. We start off on ice. We steadily increase speed - and then quite suddenly the big pendulum behind starts to swing. So why is this happening? The 993 has a front anti-roll bar (unlike the first 911s) and in the dry this actually reduces front-end grip, meaning it will understeer first, as we discovered at Millbrook. However, in very slippery conditions (i.e. on ice) the effect of the anti-roll bar is negated because the car won't dig into the surface at either end. Roll stiffness is effectively 100 per cent all round. So in these conditions the 911 falls straight into oversteer - the weight simply pushes straight on as speed increases, swinging the tail wide.

Steer into it quickly, lift off to bring the speed down and the car straightens. Obviously that didn't happen the first time I tried, and there was more arm-flailing than I would have liked on the second attempt too, but after a while I did manage one entire loop sideways. Lyon, of course, can sit sideways until the tank runs dry, which is both deeply impressive and hugely irritating.

Biggest surprise is when he advocates the use of the brakes in a slide. In the middle of a big lift-off oversteer moment, just when you think everything has gone too far, stamping on the brakes is the last thing I would have thought it sensible to do. Yet hit the ABS as hard as you can and everything just stops. No spinning tops or violent exacerbations. You just stop. And frequently pointing the right way. It's a last line of defence that you feel could have saved numerous 911 pilots had they known about it.

By the end of the day I've certainly found, grappled with and breached the 911's limits, but I still don't feel I could just jump in and drive the Bridgestones off it, far from it. I ask John what he would have said if I'd phoned and asked for just one piece of advice before driving the 911. 'Be gentle with your inputs,' is his reply. And that sums it up really. The 911 won't suffer fools gladly, it commands respect. You've got to work at it, however skilful you are. And that's why drivers love it so much.