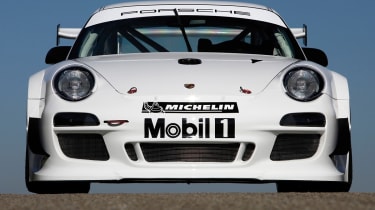 Claimed to offer better driveability and even easier handling, the 'R' succeeds the GT3 Cup S and is powered by a four-litre, six-cylinder ‘boxer’ engine, producing 480 bhp, 30 bhp more than the GT3 Cup model on which it is based and first shown at Frankfurt last September. Both cars are based on the 911 GT3 RS road car, which goes on sale in February next year.

An anti-lock braking system, traction control and an electronic throttle with ‘blip’ function on gearbox down-changes make it more driver-friendly than its predecessor.