We get up close with a naked Porsche Carrera Cup car. Sexier than BTCC? You betcha. 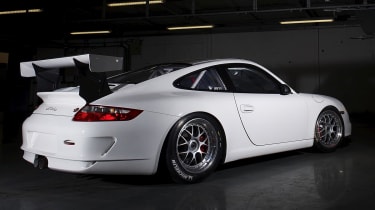 The success of the Porsche Carrera Cup GB must be a worry for the BTCC, for these considerably faster (and cheaper) machines are threatening to steal the limelight from the headline act at Thruxton this weekend. I mean, just look at it. The 997 GT3 Cup car is unquestionably the sexiest sub-£100k racer around. It’s no wonder the grids are full.

What you’re looking at here are pictures of Tony Gilham’s car taken after the first day of testing at Silverstone, but before he got busy with the sponsor stickers. This is how the car arrives, naked but ready to go.

Stuffed in the back is the usual 3797cc water-cooled flat-six developing 450bhp at 7500rpm, which is plenty for a car weighing 1200kg. That power is transmitted via a six-speed sequential dog-type gearbox through a limited-slip diff to three-piece 18-inch BBS alloys wrapped in slick racing rubber.

At the rear it’s suspended by a multi-link set-up, with a solidly mounted subframe, double coil springs (a main spring and helper spring), Sachs gas dampers and a double-blade-type anti-roll bar. Up front are McPherson struts fitted with the same springs, damper and arb, and it retains the road car’s power steering. The brakes are internally vented 380mm (355mm at the rear) steel discs grabbed by six-pot (four-pot at the rear) aluminium calipers.

Although the bodywork is based on the road car, the Cup car features numerous changes, including the obvious wide rear arches, revised front splitter and carbon rear spoiler. On top of that are the carbon doors, synthetic body panels and polycarbonate windows. All of which are so cool, it seems a shame to cover them in logos. 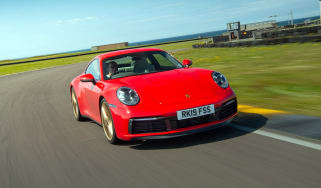 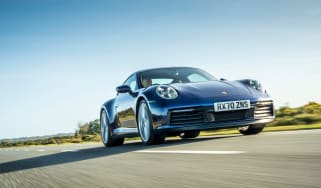