Porsche has revealed the limited edition Club Coupe, to celebrate the 60th anniversary of the first two Porsche clubs 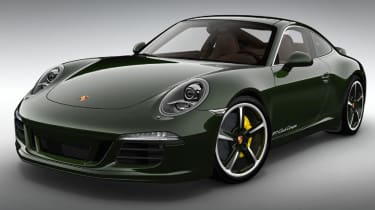 Based on the Carrera S, Porsche’s new Club Coupe is a highly optioned and unique model to commemorate the 60th anniversary of the first Porsche club, priced at £114,173 (€142,831), as long as you are member of an officially recognised Porsche club.

The model gets a set of 20-inch SportTechno wheels, the Carrera S Powerkit (which includes the sports exhaust and Sport Chrono packages) bringing total power up to 424bhp, seven-speed PDK gearbox, carbon-ceramic brakes and the dynamic sports suspension (PASM). All 13 examples will be fitted with the Sport design package, adding the classic duck-tail spoiler design, with the body painted in a shade from the Porsche ‘Individual’ range, called Brewster Green.

The first club, originally known as Westfälischer Porsche Club Hohensyburg, was set up in May 1952, just four years after the first 356 rolled off the production line, by a group of seven enthusiasts. There are now more than 640 officially recognised Porsche clubs worldwide, with more than 181,000 members in total.

Porsche is keeping one of the 13 in its collection, so to make the ordering process for the remaining 12 a little fairer, the company is running a lottery system, which is open untin June 16, and can be accessed via the Club Coupe microsite. Each of the 12 to get their hands on the Club Coupe will have their name engraved on the switch panel trim strip.