Porsche has revealed details of its four-wheel drive 911 Carrera 4 and Carrera 4S models. 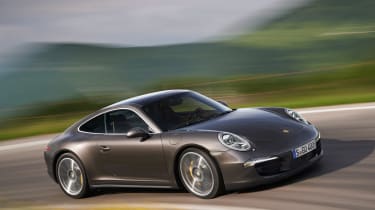 Porsche has unveiled its current generation 911 Carrera 4 and 4S model, prior to its official launch at the Paris motor show on 27 September. The four-wheel drive models are priced from £77,924, and will go on sale in the UK in December.

Featuring a new active all-wheel drive system, with an updated ‘Porsche Traction Management’ system, the new model is said to retain the rear-wheel drive feel of the 911, while gaining the benefits of four-wheel drive.

All Carrera 4 models will now get the wide-arch look, previously reserved for 4S models. The 22mm increase in width allows the fitment of 10mm wider rear tyres.

The new four-wheel drive system coupled to the current 991 equals a weight saving of 65kg over the outgoing 997 Carrera 4. Power comes from the same 345bhp 3.4-litre engine as the standard 911, or the bigger 3.8-litre powerplant, producing 395bhp in Carrera S form.

One of the biggest improvements over the four-wheel drive 997 models is a 16% improvement in economy – managing 32.8mpg in the Carrera 4 and 31.0mpg in the 4S.

From launch, it will be available in Coupe or Cabriolet form, and all models will feature the seven-speed manual gearbox as standard - with the PDK twin-clutch automatic an option.