We compare manual and PDK Porsche 911s on track, and analyse the differences between the two. 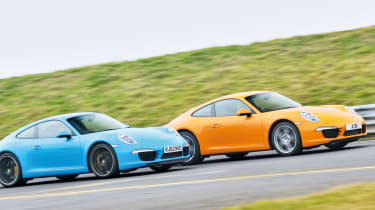 As so much of the ‘stick or paddle’ debate is based on subjectivity, we’ve brought two Porsche 911s together at the Bedford Autodrome to see what a VBOX can add to the argument. Both are Carreras, one with a seven-speed manual, the other a seven-speed PDK. Despite our best efforts, the precise spec of the cars is not otherwise identical, the manual car (Mexico Blue) boasting Porsche Torque Vectoring, 20in Carrera S wheels, PASM Sport suspension and PCCB brakes, while the PDK car (Pastel Orange) has 19in Carrera alloys, passive damping and cast-iron brakes. Although this means lap times won’t be directly comparable, it should have minimal effect on straight-line acceleration. And, of course, it’ll be fascinating to make a back-to-back subjective comparison of the physical process of driving each car.

First up, the standing-start acceleration runs. In the PDK car, launch control makes it laughably easy, the system permitting zero wheelspin but using a fraction of clutch-slip to prevent the 3.4-litre flat-six bogging down. It’s remarkably drama-free, and the upshifts are fully automated.

We do one run in each direction to achieve a two-way average. There’s only four hundredths of a second variance at 60mph, 4.49sec in one direction, 4.53 in the other for a 4.51sec average, beating Porsche’s 0-62mph claim by 0.09sec, despite a full tank and two occupants.

The manual car is trickier to launch, as there’s just my quivering clutch foot and eager throttle foot to juggle revs and traction. I can’t match the precision of PDK’s clutch control, so the launch is more aggressive. There’s a bit of axle tramp as the tyres skip with just enough wheelspin, but then, as they bite, the engine falls off cam for a split second before hauling hard once more. I’m pleased to say I nail every upshift, but there’s perceptible torque interruption even though I’m moving my left foot and left hand as quickly as they’ll go.

A look at the acceleration traces from the VBOX is fascinating. You can clearly see the drop and then spike back up again for the manual (over the two fastest runs it was consistently about 0.3sec from the drop to the beginning of the rise back up), whereas the PDK actually surges and accelerates slightly harder as it changes, then drops back down to its previous level of G, but never below it. Effectively the PDK never stops accelerating.

Thanks to the spec differences, the lap time element is less definitive, but no less revealing. Or indeed, depressing. We do two sets of laps in the PDK car, one where it does all the up and downshifts, another where I make the calls. It’s bizarrely unsettling and hard to find your rhythm when attempting a fast lap while operating only steering wheel, throttle and brake. You also have to fight the urge to intervene with a short-shift or by holding a gear a fraction longer. The lap is calm, and feels effective yet unexceptional. It’s only when I repeat the process with the added task of flipping the paddles myself that the truth is revealed…

Put simply, human brains – or mine at any rate – don’t respond so well when asked to multi-task. Mistakes begin to creep in, apexes and braking points are fractionally missed, shift decisions are made that don’t maximise the available torque. In short, the laps are scruffy by comparison, a fact reflected in a 1:23.8 best in full auto mode versus a 1:24.3 with me flapping the paddles.

Lapping the manual car is less scientific: just jump in and try to nail a good one. It handles quite differently, thanks to its more substantial rubber and Porsche Torque Vectoring, but it’s the contrast in the experience of extracting a fast time that’s especially telling. Instead of eerie calm, it takes real concentration and focus to consistently match ratios, revs and road speed while finding the best line and making steering corrections. No wonder I can really feel the adrenalin start to pump. It’s more urgent, more physical, more challenging and significantly more enjoyable.

I have no doubt a PDK car with the same detail specification would lap quicker than the manual car’s 1:23.6 best, but I’m equally certain it wouldn’t be anywhere near as satisfying. Stirring a gearstick and pumping a clutch pedal is terribly quaint and 20th century. Yet the manual transmission has a timeless appeal and enduring tactility that when done well can still render modern technology cold and charmless. One thing’s for damned sure, we’ll miss them when they’re gone.