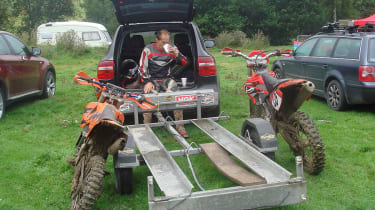 A couple of months ago I was grumbling about how the Cayenne makes heavy weather of pulling away from a standstill. Well, not any more. I discovered that if you use the default ‘D’ setting on the auto gearbox the Porsche will always pull away in second gear, hence why the engine seemed to be struggling and the take-off wasn’t exactly what you’d call electric. The solution is to press the Sport button. This sharpens the throttle response and makes the gearbox slot into first when you come to a halt. The result is a ballistic charge away from rest that’s much more in keeping with what you might expect from a vehicle as nutty as the Cayenne Turbo undoubtedly is.

After a weekend with the Porsche, Henry described his liking for it as ‘a guilty pleasure’, and I know what he means. After a shaky start I’ve really warmed to it too. A recent drive in the latest supercharged Range Rover only served to reinforce my opinion that the Cayenne Turbo is actually the better road car of the two – and that’s from someone who really likes Range Rovers. I reckon the fact that the Cayenne is specced from the start for on-road use makes a huge difference, especially the proper performance road tyres it comes on as standard. Combined with the optional carbon brakes they go a long way to disguising the weight of the car brilliantly. The Porsche is also smaller than many of its rivals so it feels a more natural car to hustle. The seats grip you nicely, too, and the chassis feels more settled through dynamic challenges than any other SUV I can think of.

I got a nice surprise when I towed my bike trailer with the Cayenne for the first time recently. Press a rocker switch in the boot and a tow bar electrically unfurls from under the rear bumper. Once experienced, you wonder why others manufacturers can’t engineer their tow bars to do the same. It’s brilliant.

Attach a trailer and the Cayenne Turbo is utterly dismissive of the added weight, charging off as if it wasn’t there. A friend even used it to tow his two porkers to slaughter last weekend. There’s a joke in there somewhere…