Porsche has launched a facelifted Cayenne model, which brings a range of cleaner engines and a new hybrid model. Details and pictures here 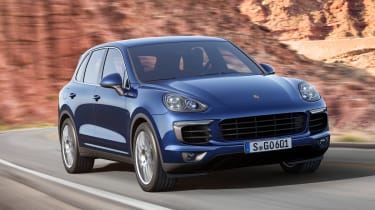 Porsche has released details of its latest Cayenne that is now on sale in the UK. As the first premium SUV to be available as a plug-in hybrid, the new sports SUV is also available with a greater range of standard features.

The new Cayenne’s exterior looks to represent a light evolution of the previous car, gaining an all new front end, with a restyled bonnet and reshaped wheel arches accompanying four point LED day running lights and new airblades. These blades also play a part in the new car’s improved efficiency, helping to direct air to the intercoolers and improve performance.

Taking heat management a step further are active cooling flaps located behind the middle air inlet, which open when the engine runs too hot and close when not needed, reducing drag.

Also improving efficiency are a range of new engines, with the greenest S E-hybrid Cayenne utilising a supercharged 3-litre V6 petrol engine and lithium-ion battery powered electric motor to produce a combined 410bhp and 435lb ft of torque. This propels the sports SUV from 0-62mph in 5.9secs and onto a top speed of 151mph, whilst still returning 83mpg combined and emitting just 79g/km of CO2. The hybrid Cayenne can even run in full electric mode for up to 22 miles, where top speed is limited to 77mph.

A twin-turbo 3.6-litre Cayenne S is also available, producing 414bhp and 406lb ft of torque enabling a 0-62 time of 5.5secs and 161mph top speed. The most potent Cayenne option is the Turbo, which harnesses 512bhp and 553lb ft of torque from its turbocharaged 4.8-litre V8, giving the most hardcore Cayenne a 0-60 time of just 4.5secs (4.4 with the option Sport Chrono package) and top speed of 173mph.

To maintain that sporting feel inside, the interior has been evolved with a 918-lookalike multi-function sports steering wheel, complete with gearshift paddles as standard. Seat ventilation can also be ordered as an option.

Order books are open now, and the first Porsche Cayennes are expected to arrive in the UK on 11 October. Priced between £49,902 for the Diesel and £93,763 for the Turbo, the new Cayenne builds on the model’s success as Porsche’s biggest seller, with the second-gen car closing after more than 303,000 units had sold.