New top of the range Cayenne gets rear-wheel steer, active aero and 542bhp 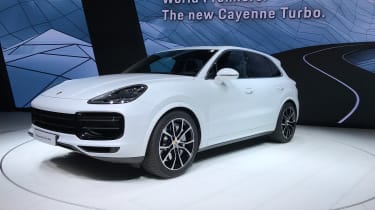 Not content with launching a new GT3 – read about the new GT3 Touring here – Porsche has also unveiled its new Cayenne Turbo at this year’s Frankfurt motor show. Despite being brand new, the Turbo is already available to order and costs just shy of £100k at £99,291.

Because a performance SUV would be nothing without a big powerful engine, the most important aspect of the new Cayenne Turbo is its powerplant. The new car’s motor certainly fits the criteria; it is equipped with a 4-litre twin-turbo hot-vee V8 that puts out 542bhp and 568lb ft of torque. It’s the same engine, with the same figures as the Panamera Turbo.

Rather than using the same dual-clutch PDK transmission found in the Panamera, the Cayenne uses a conventional eight-speed automatic gearbox called Tiptronic S.

> Find out more about the brand new Porsche Cayenne 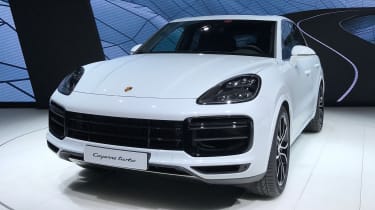 Porsche hasn’t released an official weight figure for the Cayenne Turbo yet, but with the standard model tipping the scales at 1985kg we expect it to be over two tonnes. Still, that hasn’t blunted its performance figures significantly; in fact it only makes its 0-62mph time all the more remarkable. The Turbo hits 62mph in 4.1sec. Unless it's fitted with Sport Chrono, which brings with it launch control, then it can complete the standard dash in a remarkable 3.9sec. It goes onto a top speed of 177mph, too.

Of course, so that the big Cayenne Turbo can handle with even half the poise expected of a Porsche it has every modern sophisticated chassis trick hidden under its vast body. The most conventional are a set of adaptive dampers, they are then combined with a three-chamber air suspension that allows the car to vary the spring rate. The air suspension also allows the ride height to be raised to help increase the car’s ability off road.

Thanks to a supplementary 49-volt electrical system the Turbo has electrically variable anti-roll bars; an electric motor is nestled in the stabiliser bar that adds force to increase the stiffness and reduce roll further.

It doesn’t end there; the rear axle is blessed with a torque vectoring rear limited-slip differential and an optional rear-wheel steer system, much like the current 911 GT3.

An unusual aspect of the Cayenne’s set-up is a mix of wheel and tyre sizes. Much like the marque’s sports and saloon cars, the Turbo has wider rear tyres compared to the front. The back tyres are 315 section with a 35 ratio profile on a 21-inch rim, while the fronts are 285/40 21.

To help haul the massive Cayenne to a halt it is fitted with innovative new brake discs. To help braking efficiency and improve their life, the discs are coated with a tungsten carbide layer. Called Porsche Surface Coated Brake (PSCB) it comes as standard on the Turbo, however carbon-ceramic brakes are still an optional extra.

> Read our review of the old Porsche Cayenne

If the spoiler flapping up and down wasn’t enough, so that the Turbo isn’t mistaken for Cayenne S or even a diesel, the door trims and lower rear bumper are painted the same colour as the body. There are also four exhaust pipes and a set of wide wheel arches.

When Porsche unveiled the all-new basic Cayenne last month we were relieved to see the new SUV’s interior was similar to that of the Panamera’s. The centre console and infotainment screens found in Porsche’s saloon, and now the Cayenne, are a huge improvement over the mass of buttons in the old models. On top of the brilliant basic layout, the Cayenne Turbo has new seats with an integrated headrest and a new steering wheel – both are heated as standard.

Porsche’s old Cayenne was one of the most impressive and involving SUVs to drive, and the Macan was even better. We expect the new Cayenne to be just as capable and, considering the equipment it has, the Turbo to be even more remarkable. But will it be as good as a Panamera? We very much doubt it.