The second generation Porsche Cayman has been unveiled at the LA motor show. Official pictures, details and specs here 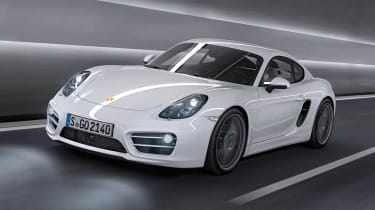 The second generation Porsche Cayman has been revealed at the 2012 Los Angeles motor show. It’s lighter than before. Like the Boxster it's based on, the new Cayman’s bodyshell is a mixture of steel and aluminium, the former used only where essential, with items like the doors and boot lid made of the latter. Around 44 per cent of the body is aluminium, leading to a remarkable 47kg loss compared to the first-gen Cayman’s. It’s accompanied by a 40 per cent hike in torsional rigidity. Thanks to inch-bigger alloy wheels (18in rims standard on the Cayman, the Cayman S getting 19s) and a larger glass area, though, the overall weight savings top out at 30kg. The Cayman is larger, its 4380mm length representing a 33mm rise, but with a 60mm longer wheelbase, the front and rear overhangs have notably shrunk, giving the car a tauter look. The styling is still evolutionary rather than revolutionary, although Porsche claims a more independent appearance to its Boxster brother than ever before. Nevertheless, its headlights, taillights and interior look spookily similar to the soft-top’s. Direct injection engines are shared with the Boxster, but with marginally more power, meaning incremental rises over the outgoing Cayman. The entry-level Cayman gets a 2.7-litre flat-six (271bhp, 214lb ft) endowing it with a 5.6sec 0-62mph time and 165mph top speed. Equipped with PDK, Porsche claims 36.7mpg and 180g/km, putting it on par with less potent hot hatchbacks.

The Cayman S is equipped with a 3.4-litre flat-six (321bhp, 273lb ft) which serves up a respective 4.9sec, 176mph, 35.3mpg and 188g/km. All models get stop/start and a six-speed manual gearbox as standard, with the seven-speed PDK transmission an option. Equipped thus, the Cayman is capable of ‘coasting’, technology seen elsewhere in the Porsche range which sees the transmission decoupling during cruising, helping to achieve those thriftier numbers.  PDK now also has what’s been dubbed a ‘drift-friendly mode’. Cut the stability control and then hold an appropriately squiffy yaw angle and you won’t suffer unexpected gearchanges, allowing you to hold a controlled slide. Standard on all Caymans is a Sport button. When pressed, the throttle response and engine map are at their sharpest and PDK shift speeds are cranked up, while stop/start and coasting deactivate.  The Cayman is also equipped with Porsche’s electro-mechanical power steering system, which has received a mixed response so far. It contributes to an overall 15 per cent cut in fuel consumption, but also filters out some of the feedback Porsche racks are known for. The options list is familiar, with Sport Chrono (including launch control and Dynamic Transmission Mounts), PASM adaptive dampers and PTV torque vectoring (including a limited-slip differential) all on there. The Cayman is on sale now, the entry-level car starting at £39,694, the Cayman S £48,783. UK deliveries begin in March 2013.

On the stand at the LA motor show it was an impressive looking thing, definitely chanelling a bit of the design language pioneered by the Carrera GT 10 years ago. It's fair to say that this is one that we're really looking forward to driving.