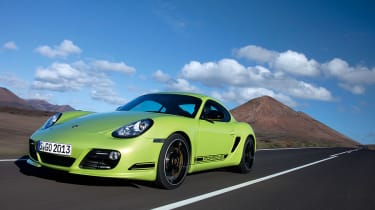 Well, it isn't an ultra-lightweight, limited production road racer like the 911 R of 1967. However, we're talking about a lighter and faster Cayman S here – an already wondrous thing.

It's also worth noting that the current 911 range is due for replacement later this year, and with the £51,728 Cayman R, Porsche has allowed it to edge closer than ever to 911 Carrera levels of performance.

The R is 55kg lighter than an S. How? Slimline 19-inch wheels (from the Boxster Spyder), light aluminium door skins (a la 911 turbo), lighter sports bucket seats and 15kg is saved from the removal of the hi-fi and air-con.

An extra 9bhp has been liberated from the 3.4-litre six-cylinder engine thanks to a new exhaust manifold and ECU program. Maximum power is now rated at 325bhp at 7400rpm and a LSD is standard.

Porsche's PASM active suspension system is not fitted and the car is 20mm lower than the Cayman S thanks to shorter and stiffer springs.

A fixed rear spoiler (reducing lift by 40%) and a revised front splitter (-15% lift) is fitted, and of course the all-important PORSCHE lettering on the side that knocks a second (at least) off the 0-60mph time...

Having spent the week before this testing a Cayman S it has to be said that the changes are subtle. First impressions are that despite the stiffer springs and dampers the R rides beautifully. This isn't a coccyx-cracking race-rep in any way.

The engine performance feels identical, which means free revving and punchy. Can't say I noticed the extra 9bhp, but the PDK version did allow downshifts higher in the rev-range.

On road or track the R's handing balance is typically Cayman – i.e. superb. The stiffer suspension and recalibrated anti-roll bars improve body control while steering accuracy and feel is improved.

It really is a wonderful thing to rip through corners. You can lean on the brakes all the way up to the apex then nail the gas hard and early and make use of the Cayman's natural traction. The LSD hooks up nice and quickly, but not before a tiny amount of understeer – undoubtedly dialled in by the Porsche engineers as a subtle early-warning system.

A non-S Lotus Evora is the only car that can match the Cayman R for performance, steering and handling feel for the price. A 911 Carrera 3.6 is over £16,000 costlier.

Oh yes. As we've established the Cayman R does without air conditioning and a stereo as standard. Both are available as a no cost option although an upgraded climate control system costs £1040.

I'd argue air-con and a radio are essential because the Cayman R is a stunning road car. However, tick those boxes and you instantly reduce the weight saving to 40kg.

I spent a long time on the Porsche configurator playing with different options, comparing it to the S, totting up prices and weights and, and, well I got thoroughly bored. So here's the conclusion…

The Cayman S is a brilliant car. The R is a little bit more brilliant. Any cynicism about the pricing, marketing, naming and/or optioning strategy goes out the window when you drive it.

If you have saved around £51,000 to spend on a small coupe, I urge you to buy one. Just remember to save a little extra for climate control. And the ceramic brakes. And the lightweight battery. And the...