Porsche celebrates as Panamera number 10,000 rolls out of Stuttgart 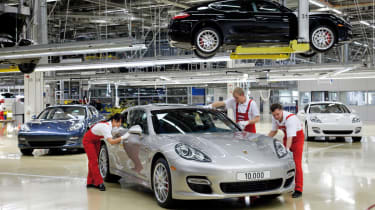 The Porsche Panamera is doing rather well. The ten thousandth Stuttgart supersaloon rolled off the Porsche production line in Leipzig this week, just three months after sales began. Number 10,000 is a platinum silver Panamera Turbo that’s heading for a customer in Singapore. The Turbo accounts for over a third of Panamera sales, ahead of the entry-level S, which makes up 20 per cent of the numbers. The biggest seller, though, is the 4S, with 44 per cent of Panameras wearing the mid-range badge. The Panamera 4S costs £77,269 in the UK, and boasts a 394bhp V8 engine mated to Porsche’s seven-speed PDK gearbox and four-wheel drive. It boasts a 175mph top speed, identical to the far lighter 911 Carrera 4. Porsche plans to build 20,000 cars across the model’s entire life cycle, the Panamera currently sharing a production line with its controversial Cayenne sibling. If the pair’s success keeps Porsche making cars like the new GT3 RS though, then we haven’t too many complaints… Read how the Panamera Turbo did against XFR and Maserati QP