Swiss tuner FAB Design gets its hands on the Porsche Panamera. Result far from pretty 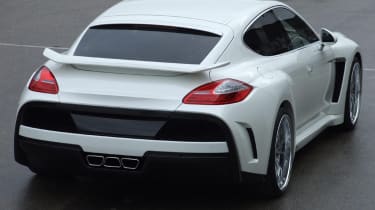 The Porsche Panamera – a car not exactly lacking in presence or the ability to split opinion. But if you were somehow under the impression it sat subtly under the radar, then worry no longer. FAB Design feels the same. ‘FAB Design has refined the new Porsche Panamera and turned the conservative, standard product into a dream car’, the company says. If this is a car of somebody’s dreams, they’ve definitely had too much cheese before bed. The wheelarches are much beefier (helpful when housing 22in rims), the front grille a lot more gaping and the rear of the car nigh-on unrecognisable. There’s a stonking rear diffuser, which lies beneath a trio of exhausts with trapezoidal tips. A smattering of gloss black trim leads to back-end styling that’s oddly reminiscent of a basking shark. A sculptured rear wing doesn’t do anything to lessen its impact, but then that’s no doubt FAB’s idea… Of more appeal are the dynamic and mechanical tweaks. The Panamera Turbo’s standard 4.8-litre engine is cranked up to 690bhp while some underbody tweaks drop the centre of gravity by 20mm. All the questionable bodywork mods are crafted from carbonfibre, too, so at least they shed some weight as well as style. It marks the first FAB Design venture that doesn’t involve Mercedes produce, and the company promises more is to come. If you think they’ve peaked already though, and lust after this Panamera, then move quickly: just 15 will be made. Lay off the cheese, too. Read how the Porsche Panamera Turbo does against its rivals Click to head to FAB Design’s website to find out more about its work Follow evo on Twitter or join the Facebook page for the latest car news