We drive the Panamera S with the very rare manual gearbox. Is it better than the PDK? 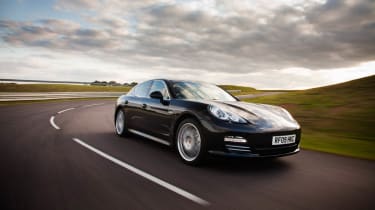 The Porsche Panamera S - as before, but sampled with the manual gearbox that we’ve not driven until now. Even having the option of a stick makes the Panamera an extreme rarity in this segment, but for determined self-shifters the S’s combination of 395bhp and a six-speed gearbox offers strong appeal. It’s £2000 cheaper than the PDK-equipped automatic, too. It costs £78,221, before the inevitable options workout.

The arrival of the basic V6 Panamera has pushed the V8-fitted S to the middle of the model tree, between the entry-level car and the mighty Turbo. As before, it uses a 4.8-litre direct injection V8 developed from the engine  found in the Cayenne. The manual transmission is claimed to add 0.2 seconds to the claimed 0-62mph time compared to the PDK, although the official economy figures are considerably further apart - on the official European test the manual box scores 22.6mpg compared to the PDK’s 26.2mpg.

There’s something immensely satisfying about the tactile experience of a big car, a big engine and a manual gearbox. The Panamera S isn’t mega fast by segment standards - although Porsche claims a 177mph top speed if you can find a long enough straight. The V8 engine is happy to grumble along at low revs - something the shift-happy PDK rarely allows when left in its auto mode - although it needs to be revved hard to deliver its best.

Fortunately, the manual box’s gearshift action possesses exactly the sort of weight and heft you’d hope to find in a manual Porsche. Even better, the solid brake pedal acts as a steady enough fulcrum for that endangered driving pleasure: the heel-and-toe gearchange. And don’t be too scared of that fuel economy figure, either - on our experience it’s probably far closer to the mpg delivered by the PDK than the official figures suggest.

You’ll struggle to find another manual gearbox in a saloon offering similar performance - especially with BMW confirming European versions of the new M5 will only come with flappy paddles. The VXR8 is the only rival that springs to mind - albeit for not much more than half the price.

You’ll be in a small minority, with even Porsche admitting that the manual Panamera is always going to be an extremely small seller. And for that reason, be aware the third pedal is likely to come with a sizeable extra residual hit come resale time.