Competing as a factory and customer racer, as per the regulations the Glickenhaus 007 will also be homologated for the road 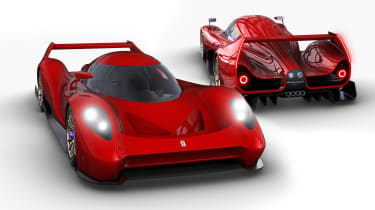 Scuderia Cameron Glickenhaus will sit alongside Toyota, Aston Martin and ByKolles in the forthcoming World Endurance Car hypercar class, with its new, but decidedly retro-styled 007. As one of the first racing teams to confirm its involvement in the new flagship WEC class, the American brand has now thrown the gauntlet down for rival teams as the 2020/2021 season approaches.

Origins of the power plant are yet to be disclosed, but SCG has confirmed that the €2m (£1.6m) racer will be powered by an 829bhp 3-litre twin-turbocharged V6, and assembled in its current facility in Turin. In order to deliver at Le Mans, the 007 will be required to operate flawlessly for 30 hours straight, and so it’s set to enter a rigorous testing schedule beginning later this year.

Preliminary wind tunnel tests are already complete, with more in-depth analysis to take place later this month. By summer 2020, Glickenhaus expects to have engineering finalised, and subsystems assembled ahead of the start of production in August, making way for the first shakedown in September 2020.

Though it’s not clear if the 007 will adopt hybrid assistance, regulations stipulate that electrical motors can produce no more than 248bhp, combining with a combustion engine for a maximum output of 740bhp. The hybrid system itself is only able to be deployed via the front wheels at speeds of over 80mph to even out any traction advantages four driven wheels will have at low speeds. 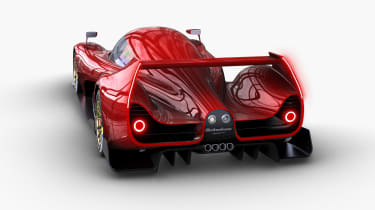 The SCG007 will also adhere to the minimum weight ruling of 1100kg, which together with the power deployment and mechanical and aero grip calculations, should give all racers in the Hypercar class the capability of lapping the Le Mans Circuit de la Sarthe in 3min 30sec. Moveable aero has also been ruled out.

Fears as to whether a relatively small team will be able to compete with larger manufacturers and their even more significant budgets is not a worry for Scuderia Cameron Glickenhaus. The new rules limit race development budgets to €20million, all of which Glickenhaus has already secured through sponsorship, according to comments on the firm’s official Twitter account. The brand seems rather confident too, commenting: ‘An American car hasn’t won First Overall at Le Mans since 1967. It’s time.’

So far, three other manufacturers have confirmed their entries into the Hypercar class, namely Toyota Gazoo Racing, which has enjoyed two years of unchallenged success, Aston Martin, which has already completed a majority of road-going homologation with its Valkyrie, and ByKolles. SCG will have its own road-legal version too, as per class regulations, with a minimum of 20 units required to be produced within two years of the race car.