Watch these exciting videos from World Rallycross this weekend 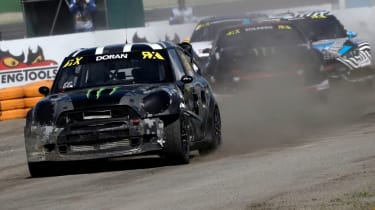 Heady, breathless stuff indeed and yet this arguably wasn’t the most exciting race of the weekend, as the video below of the second semi-final shows…

So, Mattias Ekström took a stunning overall win and goes into a share of the lead of the championship (with Petter Solberg) on 48 points. Ekström was also fastest qualifier on the Saturday and the result was all the more impressive as he was also racing in an Audi at the DTM (also at Hockenheim) this weekend. The EKS Audi S1 Supercars are looking fearsomely fast this year as attested by Ekström’s teammate taking second pace. We can attest to just how mind-blowing they feel having been lucky enough to drive Ekström’s car at the end of last year (issue 221 of evo Magazine).

Ken Block’s third position looked very unlikely on Saturday afternoon having finished 13th in qualifying, with only the top 12 going through to the Sunday. However, Timmy Hansen (Loeb’s teammate) was disqualified from Q4, giving Block a place in the semi-finals. Block finished third in his semi-final, putting his Ford Focus RX on the back row of the grid for the final. However, when he found himself in a Doran/Solberg sandwich on the first lap of the final he somehow came out on top and clung on to take the final step of the podium.

Britain’s Liam Doran also had a very impressive weekend, winning his semi-final and finishing fifth overall. This was despite his JRM Racing Mini RX only having a 1.6-litre engine (compared to the other cars’ 2-litre units) and therefore being down on power, putting out ‘only’ 480bhp compared to the others’ 600bhp. A 2-litre upgrade is expected soon.

Loeb, in case you’re wondering, qualified seventh overall on the Saturday, but came into contact with fellow Frenchman Davy Jeanney in his semi-final and both drivers failed to make the final. The next round of the FIA World Rallycross is this coming weekend in Belgium. Can't wait.